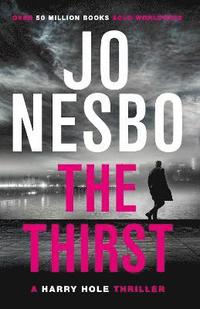 av Jo Nesbo
Häftad Engelska, 2017-12-14
98
Köp
Spara som favorit
Skickas inom 5-8 vardagar.
Gratis frakt inom Sverige över 159 kr för privatpersoner.
Finns även som
Visa alla 1 format & utgåvor
Harry Hole is back in the gripping Sunday Times number one bestseller! 'The king of all crime writers' Sunday Express There's a new killer on the streets A woman is found murdered after an internet date. The marks left on her body show the police that they are dealing with a particularly vicious killer. And he's out for blood Under pressure from the media to solve the crime, the force know there's only one man for the job. But Harry Hole is reluctant to return to the place that almost took everything from him. Until he starts to suspect a connection between this killing and his one failed case... *JO NESBO HAS SOLD 50 MILLION BOOKS WORLDWIDE* *Watch out for The Kingdom, the new Jo Nesbo thriller, out now*
Visa hela texten

An extremely gruesome journey to the darker recesses of human nature, this grisly treat will delight Nesbo's fans * Mirror * It's a big-boned, Technicolor epic in the current Nesbo style, starting adagio and ending accelerando, but with the kind of close psychological character readings that distinguished his early work * Guardian * An epic tale that will delight fans of the bestselling series... There is always a risk that if you resurrect a much-loved series after a long break it will not reach its previous highs. But The Thirst is Nesbo at his glorious best with even the minor characters wonderfully drawn. This tense, nerve-shredding tale is impossible to put down as it hurtles towards a stunning finale. Nesbo is one of the best thriller writers on the planet -- Charlotte Heathcote * Daily Express * Gripping from the get-go, deliciously dark and expertly plotted, this is Nesbo at his brilliant best * Heat * Expertly plotted with vividly drawn characters, frenetic police chases and philosophising villains[...] Expect to be thoroughly entertained. * Crime Fiction Lover *

Jo Nesbo is one of the world's bestselling crime writers, with The Leopard, Phantom, Police, The Son, The Thirst and Knife all topping the Sunday Times bestseller charts. He's an international number one bestseller and his books are published in 50 languages, selling over 50 million copies around the world. Before becoming a crime writer, Nesbo played football for Norway's premier league team Molde, but his dream of playing professionally for Spurs was dashed when he tore ligaments in his knee at the age of eighteen. After three years military service he attended business school and formed the band Di Derre ('Them There'). They topped the charts in Norway, but Nesbo continued working as a financial analyst, crunching numbers during the day and gigging at night. When commissioned by a publisher to write a memoir about life on the road with his band, he instead came up with the plot for his first Harry Hole crime novel, The Bat. Sign up to the Jo Nesbo newsletter for all the latest news: jonesbo.com/newsletter NEIL SMITH is a French to English translator who lives in Montreal. He was born in Montreal, but grew up in Chicago and Boston. His first book, the story collection Bang Crunch, was published around the world, chosen as a best book of the year by the Globe and Mail and the Washington Post, and selected as a Heather's Pick at Indigo/Chapters. Boo is his first novel.