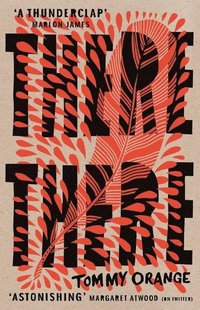 av Tommy Orange
Häftad Engelska, 2019-05-09
99
Köp
Spara som favorit
Finns i lager! Skickas inom 1-2 vardagar.
Gratis frakt inom Sverige över 159 kr för privatpersoner.
Finns även som
Visa alla 4 format & utgåvor
** Shortlisted for the 2020 International Dublin Literary Award ** One of Barack Obama's best books of 2018, the New York Times bestselling novel about contemporary America from a bold new Native American voice 'A thunderclap' Marlon James 'Astonishing' Margaret Atwood, via Twitter 'Pure soaring beauty' Colm Toibin Jacquie Red Feather is newly sober and hoping to reconnect with her estranged family. That's why she is there. Dene is there because he has been collecting stories to honour his uncle's death, while Edwin is looking for his true father and Opal came to watch her boy Orvil dance. All of them are connected by bonds they may not yet understand. All of them are here for the celebration that is the Big Oakland Powwow. But Tony Loneman is also there. And Tony has come to the Powow with darker intentions. 'An exhilarating, polyphonic debut novel... Dazzling' Daily Telegraph 'Lyrical and playful, shaking and shimmering with energy... Orange creates beauty out of tragedy' Guardian 'Bold and engrossing... Orange has got under his characters' skins, allowing them to speak for themselves' Financial Times A New York Times Top 10 Best Book 2018 An Oprah Magazine Top 15 Best Book 2018 Finalist for the Pulitzer Prize for Fiction 2019 Shortlisted for the Rathbones Folio Prize 2019 Winner of the Writer's Center First Novel Award 2018
Visa hela texten

Compelling and affecting... It's a searing, haunting read - all the way to its violent, intense climax -- Hephzibah Anderson * Mail on Sunday * It is optimism that lingers after finishing the book. Fragile and flawed though this hope might be, it remains moving and powerful, just like the rest of Orange's impressive achievement -- Alexander Larman * Observer * A magnificent achievement... Orange has created a remarkable work, and I have little doubt that he will be ranked in the pantheon of 21st century American novelists -- Stuart Kelly * Scotland on Sunday * [A] bold and engrossing debut... [Orange] has got under his characters' skins, allowing them to speak for themselves... This is a powerful novel of pain and possibility -- Erica Wagner * Financial Times * How do you rewrite the story of a people? This question shapes Tommy Orange's sorrowful, beautiful debut novel . . . There There itself is a kind of dance. Even in its tragic details, it is lyrical and playful, shaking and shimmering with energy. The novel dips into the tiniest personal details and sweeps across history. Orange creates beauty out of tragedy. -- Rowan Hisayo Buchanan * Guardian *

Tommy Orange was born and raised in Oakland, California. He is an enrolled member of the Cheyenne and Arapaho Tribes of Oklahoma. He currently lives in Angels Camp, California. Tommy is a recent graduate from the MFA programme at the Institute of American Indian Arts. He is a 2014 MacDowell Fellow, and a 2016 Writing by Writers Fellow. There There is his first novel.