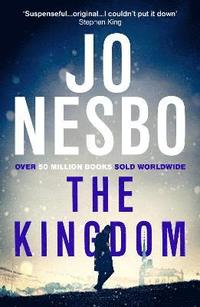 av Jo Nesbo
Häftad Engelska, 2021-04-29
119
Köp
Spara som favorit
'Suspenseful, original...special in every way' Stephen King TWO BROTHERS. BOUND BY BLOOD...AND A LIFETIME OF SECRETS. When Roy and Carl's parents die suddenly, sixteen-year-old Roy is left as protector to his impulsive younger brother. But when Carl decides to travel the world in search of his fortune, Roy stays behind in their sleepy village, satisfied with his peaceful life as a mechanic. Some years later, Carl returns with his charismatic new wife, Shannon - an architect. They are full of exciting plans to build a spa hotel on their family land. Carl wants not only to make the brothers rich but the rest of the village, too. It's only a matter of time before what begins as a jubilant homecoming sparks off a series of events that threaten to derail everything Roy holds dear, as long-buried family secrets begin to rise to the surface... _________________________ PRAISE FOR THE KINGDOM: 'The Kingdom is a stunning novel from a storyteller with few equals' Daily Express 'Jo Nesbo remains the king of Scandicrime' Financial Times 'A stunning novel' Daily Mirror 'A sombre delight. There are shades of a Nordic Ripley, or maybe Virginia Andrews on aquavit. Choose your poison' The Times 'The latest stand-alone from the chronicler of Inspector Harry Hole puts all the murky, violent twists on brotherly love that you'd expect from this leading exponent of Nordic noir...' Kirkus Reviews (Starred Review) ________________________ READERS LOVE THE KINGDOM: ***** 'Intriguing, mysterious, full of suspense and as twisty as one of the roads up to The Kingdom' Netgalley reader ***** 'A gripping read... once it all starts to fall into place you can't put the book down!' Netgalley reader ***** 'To say I couldn't put it down is an understatement... One of my favourite books this year' Netgalley reader ***** 'A great read with plenty of twists and surprises...my book of the year so far' Netgalley reader
Visa hela texten

I read THE KINGDOM and couldn't put it down...suspenseful...original...this one is special in every way. * Stephen King * Jo Nesbo remains the king of Scandicrime. * Financial Times * Superbly written and magnificently chilling * Sunday Mirror * This being Nesbo there is plenty of deception, death and partial decapitation to come. No Harry Hole this time, but still a sombre delight. There are shades of a Nordic Ripley, or maybe Virginia Andrews on aquavit. Choose your poison * The Times * The Kingdom is a stunning novel from a storyteller with few equals -- Jon Coates * UK Press Syndication *

Jo Nesbo (Author) Jo Nesbo is one of the world's bestselling crime writers, with The Leopard, Phantom, Police, The Son, The Thirst, Macbeth and Knife all topping the Sunday Times bestseller charts. He's an international number one bestseller and his books are published in 50 languages, selling over 50 million copies around the world. Before becoming a crime writer, Nesbo played football for Norway's premier league team Molde, but his dream of playing professionally for Spurs was dashed when he tore ligaments in his knee at the age of eighteen. After three years military service he attended business school and formed the band Di Derre ('Them There'). They topped the charts in Norway, but Nesbo continued working as a financial analyst, crunching numbers during the day and gigging at night. When commissioned by a publisher to write a memoir about life on the road with his band, he instead came up with the plot for his first Harry Hole crime novel, The Bat. Sign up to the Jo Nesbo newsletter for all the latest news: jonesbo.com/newsletter Robert Ferguson (Translator) Robert Ferguson has lived in Norway since 1983. His translations include Norwegian Wood by Lars Mytting, the four novels in Torkil Damhaug's Oslo Crime Files series, and Tales of Love and Loss by Knut Hamsun. He is the author of several biographies, a Viking history and, most recently, The Cabin in the Mountains: A Norwegian Odyssey.