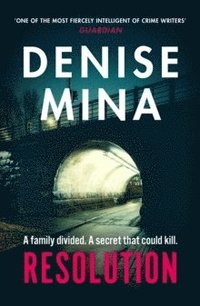 av Denise Mina
Häftad Engelska, 2019-01-03
98
Köp
Spara som favorit
Finns även som
Visa alla 2 format & utgåvor
A FAMILY DIVIDED. A SECRET THAT COULD KILL. 'Denise Mina is proving to be one of the finest crime writers of her generation' Daily Express Maureen O'Donnell is facing the darkest episode in her life. The psychologist who murdered her boyfriend is up for trial, with Maureen as the reluctant star witness, and her abusive father has arrived back in Glasgow. On top of it all, she has become embroiled in someone else's family feud. When an elderly market stallholder dies after a brutal beating, Maureen suspects the woman's son. She soon discovers that his health club is a front for a far less respectable establishment. As her court appearance approaches, Maureen is under threat once again, and this time she has very few protectors...
Visa hela texten

Denise Mina is proving to be one of the finest crime writers of her generation * Daily Express * A riveting story with characters who leap from the page fully formed, wonderfully realistic dialogue and the outcome in doubt until the final pages * Daily Telegraph *

After a peripatetic childhood in Glasgow, Denise Mina left school at 16 before doing her law degree at Glasgow University. Her first novel, Garnethill, was published in 1998 and won the CWA John Creasey Dagger for Best First Crime Novel. She has published twelve novels including the Garnethill trilogy, the Paddy Meehan series and the Alex Morrow series. She has been nominated for many prizes including the CWA Gold Dagger and has won the Theakston Old Peculier Crime Novel of the Year Award twice. In addition to novels, Denise has also written plays and graphic novels including the adaptation of The Girl with the Dragon Tattoo. In 2014, she was inducted into the Crime Writers' Association Hall of Fame. She has also presented TV and radio programmes as well as appearing regularly in the media. She lives and works in Glasgow.