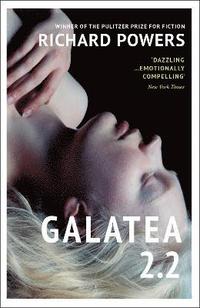 av Richard Powers
Häftad Engelska, 2019-11-07
129
Köp
Spara som favorit
Finns även som
Visa alla 3 format & utgåvor
Read this thrilling and timely novel of the human soul from the Pulitzer Prize-winning author of The Overstory. After many years of living abroad, a young writer returns to the United States to take up a position at his former college. There he encounters Philip Lentz, an outspoken neurologist intent on using computers to model the human brain. Lentz involves the writer in an outlandish and irresistible project - to train a computing system by reading a canonical list of Great Books. Through repeated tutorials, the machine grows gradually more worldly, until it demands to know its own age, sex, race and reason for existing. 'An ingenious, ambitious, at times dizzily cerebral work... It soars and spins... The novel attains an aching, melancholy beauty' New York Times
Visa hela texten

Extraordinary. Entertainment of a very high order... One of the best books of the year * GQ * Dazzling... A cerebral thriller that's both intellectually engaging and emotionally compelling. A lively tour de force * New York Times * Powers...can nail emotional complexities with precision, while using his characters to explore how emerging technologies might shape our lives * Daily Telegraph * It's not possible for Powers to write an uninteresting book... If Powers were an American writer of the nineteenth century, which writer would he be? He'd probably be the Herman Melville of Moby-Dick. His picture is that big -- Margaret Atwood * New York Review of Books * An extraordinary and brilliant novel of ideas * Time Out *

Richard Powers has published thirteen novels. He is a MacArthur Fellow and received the National Book Award. His most recent book, The Overstory, won the Pulitzer Prize for Fiction and was shortlisted for the Booker Prize. He lives in the Great Smoky Mountains.