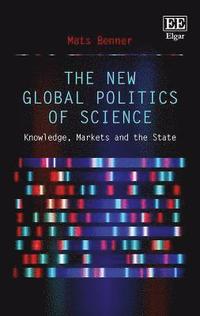 The New Global Politics of Science

Knowledge, Markets and the State

av Mats Benner
Inbunden Engelska, 2018-08-31
949
Köp
Spara som favorit
Skickas inom 7-10 vardagar.
Fri frakt inom Sverige för privatpersoner.
Science has become a central political concern with massive increases in public investment, but resources are embedded in a complex web of expectations that vary between countries and regions. This book outlines an insightful understanding of science policy as both concerning the governance of science itself through priority-setting, funding, organization and articulation with polity, society and economy, and its extra-organizational connections in terms of higher education, innovation and national policy concerns. The New Global Politics of Science examines how science and innovation have become truly global, and the consequences of this for scientists, policymakers and citizens. This book provides an overview of how research policies have evolved in different countries and contexts. It also examines how science research has been aligned with nation-building and state-formation, enmeshed in meta-governance, and how this relates to economic growth. Analysing how knowledge policies have been forged in their specific historical and geographical settings, this book will be an invaluable tool for scholars and policymakers in the fields of science, innovation and public policy.
Visa hela texten

'Mats Benner's The New Global Politics of Science: Knowledge, Markets and the State provides an analytically insightful and impressively wide ranging contemporary account of the governance, or "knowledge politics", of research across major national performers. The informed and balanced integration of analytical themes spanning national innovation systems, the politics of research, and science and technological studies make it a valuable contribution to several fields of study.' -- Irwin Feller, Pennsylvania State University, US 'Benner's ambitious book globalizes the field of knowledge policy, showing how the universal link between science and economic growth, across all world regions supersedes previous distinctions among nations based upon traditional political and military criteria.' -- Henry Etzkowitz, Stanford University, US 'The New Global Politics of Science ventures to study and analyze the growing national investment in science, including academic science. Mats Benner shows that while global forces are real and important, the nation-states and geography remain critical determinants of R&D productivity. His case study approach, including China, India, Hong Kong, Singapore, the United States, and the pan-European research area, explores both differences and similarities in regional science systems and the heightened sense of competition and shared responsibility. Science remains not only the Endless Frontier, but increasingly the primary means of economic and, one hopes, social progress.' -- John Aubrey Douglass, University of California, Berkeley, US

Contents: 1. The new global politics of research 2. China - the antinomies of catching up 3. India waits - The protracted route to a Knowledge State 4. Singapore and Hong Kong - small, similar but different 5. Why is there no knowledge policy in the United States? 6. The European Union - straddling interests and expectations 7. Europe beyond the European Union: a multitude of models 8. Reprise: the new global politics of research References Index