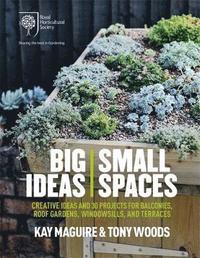 Kay Maguire is the author of the award-winning, bestselling RHS Grow Your Own Crops in Pots and RHS Red Hot Chilli Grower. She is a regular contributor to gardening magazines such as BBC Gardeners' World, The Garden and Amateur Gardening as well as being the video producer for the RHS website. Kay trained at the Royal Botanic Gardens, Kew, where she gained the Kew Diploma, and was the Horticultural Editor of the BBC's Gardeners' World for six years. She is now a freelance writer, editor, producer and, most importantly, grower. Garden designer Tony Woods trained at Myerscough College and set up his urban garden design company, Garden Club London, at the age of 26. The company specializes in plant-focused garden design and soft landscaping in an urban setting, often on balconies, roof gardens and terraces. In 2013 he won the RHS's Young Designer of the Year award for his impressive 'Escape to the City' garden at the Tatton Park Flower Show. Monty Don of the BBC's Gardeners' World described Tony as a garden designer with 'extraordinary sureness of touch'. In the summer of 2014 Tony designed a roof garden for retailer John Lewis's 150th anniversary celebrations at its flagship Oxford Street store in London and another in the summer of 2016. The Royal Horticultural Society (RHS) is the UK's largest gardening charity, dedicated to advancing horticulture and promoting good gardening.