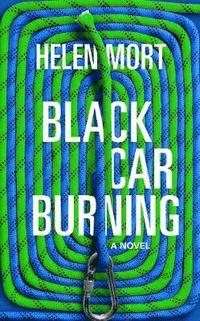 av Helen Mort
Inbunden Engelska, 2019-04-04
169
Köp
Spara som favorit
Skickas inom 5-8 vardagar.
Gratis frakt inom Sverige över 159 kr för privatpersoner.
Finns även som
Visa alla 2 format & utgåvor
How do we trust each other? Alexa is a young police community support officer whose world feels unstable. Her father is estranged and her girlfriend is increasingly distant. Their polyamorous relationship - which for years felt so natural - is starting to seem strained. As she patrols Sheffield she senses the rising tensions in its disparate communities and doubts her ability to keep the peace, to help, to change anything. Caron is pushing Alexa away and pushing herself ever harder. A climber, she fixates on a brutal route known as Black Car Burning and throws herself into a cycle of repetition and risk. Leigh, who works at a local gear shop, watches Caron climb and feels complicit. Meanwhile, an ex-police officer compulsively revisits the April day in 1989 that changed his life forever. Trapped in his memories of the disaster, he tracks the Hillsborough inquests, questioning everything. As the young women negotiate the streets of the city and its violent inheritance, the rock faces of Stanage and their relationships with each other, the urban and natural landscape watches over them, an ever-present witness. Black Car Burning is a brilliant debut novel of trust and trauma, fear and falling, from one of our best young writers.
Visa hela texten

A deeply internalised tale about love and yearning, trauma and loss, and springs from a place where the whispered thoughts of both people and places intersect in unsettling fashion -- Helen Nugent * Northern Soul, *Books of the Year* * This book is a symphony of voices: of lovers and the land they grasp in strong but scar-lined hands. Black Car Burning channels the soul of a city and its surrounds. Helen Mort shifts with deftness and empathy from the sensuous to the dark, communing with slandered neighbourhoods, the shadow of a disaster, and a generation's complex ascents through love. A hymn to a special city and an unforgettable book -- Damian Le Bas, author of The Stopping Places Black Car Burning does what surprisingly few books even attempt: it gives a voice to the lyric landscapes of South Yorkshire, it looks beyond binary cliches to consider the real lives of real people in streets and suburbs that are often forgotten; Mort handles trauma, lust and loss so tenderly and deftly, it is hard to believe that this is a first novel -- Andrew McMillan, author of Physical This agile, softly-spoken novel isn't so much about rock climbing as about being alive. Helen Mort tracks her characters from the gritty pleasures of the Sheffield crags to the traumas of Hillsborough. Meanwhile, the very rocks and rivers speak, defining a landscape of use, mystery and change, hope. Brilliant -- M. John Harrison Helen Mort is unmistakably one of the most brilliant poets of her generation; Black Car Burning shows her to be a remarkable novelist, too. Here the landscape itself is given presence - a deep-time gritstone witness to the hearts and hates of humans. Violence, trauma, trust and hope twine together in this novel of many voices, ancient and modern. As you're drawn on through - up into - the book, you begin to realize that beneath the bright surface is a profound patterning, slowly disclosing itself to the reader -- Robert Macfarlane A book that deals empathetically and movingly with [Sheffield's] ongoing legacy -- Yvette Huddleston * Yorkshire Post * An impressive, Sheffield-set tale... the disparate voices are held together by short passages in which the landscape itself is given voice. These act as welcome poetic rocks in the stream of the narrative... [and] are startling reminders of Mort's considerable poetic skill -- Jude Cook * Spectator * Bold, imaginative...intensely realistic, swarming with minute physical and social detail... Mort writes brilliantly about the physical presence of the city, and she deals just as well with the tight focus of the climb... [Black Car Burning] is frequently exhilarating in its accurate sympathy, with some inch-perfect dialogue and astute observation throughout... Poet writes gripping novel: now there's something you don't hear every day -- Sean O'Brien * Times Literary Supplement * Mort has reined in the poetry to write a gritty northern novel in a lean, unflashy prose, only letting herself go in lyrical interludes spoken by the landscape itself -- Phil Baker * Sunday Times * Black Car Burning explores the ties that bind us: literally, while strung across a cliff face in high winds, or figuratively in the tenuous bonds that hold both relationships and communities together, and which we are all responsible for maintaining. It's especially gratifying to inhabit a female-focused world within a climbing scene still party defined by machismo and male bravado. Helen Mort's writing is confident and compassionate and this is a mature and evocative debut -- Ben Myers * New Statesman * A love letter to [Mort's] home city of Sheffield... Politics and landscape are fiercely intertwined in the history of South Yorkshire, and Mort now demonstrates that she can write as assuredly on both subjects in novel form as in her poetry... Mort, in a beautifully accomplished debut, has blended a rich alloy: a deeply felt work of loss, time and healing -- Catherine Taylor * The Guardian *

Helen Mort was born in Sheffield in 1985, and grew up in nearby Chesterfield. Five times winner of the Foyle Young Poets Award, she received an Eric Gregory Award in 2007 and won the Manchester Young Writer Prize in 2008. Her first collection, Division Street (2013), was shortlisted for the T.S. Eliot Prize and Costa Poetry Award, and won the Fenton Aldeburgh First Collection Prize. In 2014, she was named as a 'Next Generation Poet', the prestigious accolade announced only once every ten years, recognising the 20 most exciting new poets from the UK and Ireland. No Map Could Show Them (2016), her second collection, about women and mountaineering, was a Poetry Book Society Recommendation. Helen has been the Wordsworth Trust Poet in Residence and the Derbyshire Poet Laureate and was named one of the RSL's 40 under 40 Fellows in 2018. She is a Lecturer in Creative Writing at Manchester Metropolitan University and lives in Sheffield. Black Car Burning is her first novel.