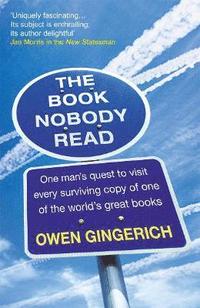 The Book Nobody Read

av Owen Gingerich
Häftad Engelska, 2017-03-27
129
Köp
Spara som favorit
Skickas inom 5-8 vardagar.
Fri frakt inom Sverige för privatpersoner.
1543 saw the publication of one of the most significant scientific works ever written: De revolutionibus (On the Revolutions of the Heavenly Spheres), in which Nicolaus Copernicus presented a radically different structure of the cosmos by placing the sun, and not the earth, at the centre of the universe. But did anyone take notice? Harvard astrophysicist Owen Gingerich was intrigued by the bold claim made by Arthur Koestler in his bestselling The Sleepwalkers that sixteenth-century Europe paid little attention to the groundbreaking, but dense, masterpiece. Gingerich embarked on a thirty-year odyssey to examine every extant copy to prove Koestler wrong... Logging thousands of hours and hundreds of thousands of miles Gingerich uncovered a treasure trove of material on the life of a book and the evolution of an idea. His quest led him to copies once owned by saints, heretics, and scallywags, by musicians and movie stars; some easily accessible, others almost lost to time, politics and the black market. Part biography of a book and a man, part bibliographic and bibliophilic quest, Gingerich's The Book Nobody Read is an utterly captivating piece of writing, a testament to the power both of books and the love of books.
Visa hela texten

'Only one of many illuminations, major and minor, in his book... A driven, fascinating book, and a rarity - a history of science by someone who actually knows about science.' -- John Carey * Sunday Times * 'A fascinating story of a scholar as sleuth. His enthusiasm for what might be judged a rather fine point of history is infectious. His book deserves to be read not only by historians and bibliophiles, but by anyone with a taste for arcane detective adventures and a curiosity about the motivations of scholarly perseverance... As in most good adventure stories, the rewards are in the pursuit itself.' * New York Times * 'Owen Gingerich knows how to judge a book - by its readers.In this exuberant tale he encounters bookworms and book thieves, book lovers, dealers, and collectors, book restorers and forgers, librarians, auctioneers, even FBI and Interpol agents A detective story, a Renaissance flashback, an expose, a true confession, an altogether engrossing, edifying romp' -- Dava Sobel

Bloggat om The Book Nobody Read

Owen Gingerich is Professor of Astronomy at Harvard University in Cambridge, Massachussetts.