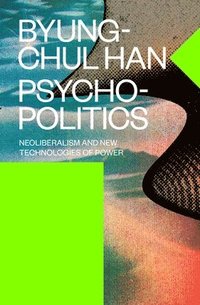 Neoliberalism and New Technologies of Power

av Byung-Chul Han
Häftad Engelska, 2017-11-07
129
Köp
Spara som favorit
Skickas inom 5-8 vardagar.
Gratis frakt inom Sverige över 159 kr för privatpersoner.
Finns även som
Visa alla 2 format & utgåvor
Byung-Chul Han, a star of German philosophy, continues his passionate critique of neoliberalism, trenchantly describing a regime of technological domination that, in contrast to Foucault's biopower, has discovered the productive force of the psyche. In the course of discussing all the facets of neoliberal psychopolitics fueling our contemporary crisis of freedom, Han elaborates an analytical framework that provides an original theory of Big Data and a lucid phenomenology of emotion. But this provocative essay proposes counter models too, presenting a wealth of ideas and surprising alternatives at every turn.
Visa hela texten

"The new star of German philosophy." El Pais "What is new about new media? These are philosophical questions for Byung-Chul Han, and precisely here lies the appeal of his essays." Die Welt "In Psychopolitics, critique of the media and of capitalism fuse into the coherent picture of a society that has been both blinded and paralysed by alien forces. Confident and compelling." Spiegel Online "A combination of neoliberal ethics and ubiquitous data capture has brought about a fundamental transformation and expansion of capitalist power, beyond even the fears of the Frankfurt School. In this blistering critique, Byung-Chul Han shows how capitalism has now finally broken free of liberalism, shrinking the spaces of individuality and autonomy yet further. At the same time, Psychopolitics demonstrates how critical theory can and must be rejuvenated for the age of big data." - Will Davies, author of The Happiness Industry "How do we say we? It seems important. How do we imagine collective action, in other words, how do we imagine acting on a scale sufficient to change the social order? How seriously can or should one take the idea of freedom in the era of Big Data? There seems to be something drastically wrong with common ideas about what the word act means. Psychopolitics is a beautifully sculpted attempt to figure out how to mean action differently, in an age where humans are encouraged to believe that it's possible and necessary to see everything." - Timothy Morton "A wunderkind of a newly resurgent and unprecedentedly readable German philosophy." - Stuart Jeffries, Guardian

Byung-Chul Han, studied metallurgy in Korea, then philosophy, German literature and Catholic theology in Freiburg and Munich. He has taught philosophy at the University of Basel, and philosophy and media theory at the School for Design in Karlsruhe. In 2012, he was appointed professor at the Berlin University of the Arts. Han's other works available in English include The Burnout Society, The Transparency Society and The Agony of Eros.