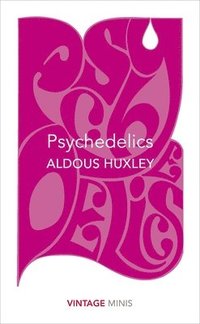 av Aldous Huxley
Häftad Engelska, 2017-06-08
64
Köp
Spara som favorit
Finns även som
Visa alla 1 format & utgåvor
Could drugs offer a new way of seeing the world? In 1953, in the presence of an investigator, Aldous Huxley took four-tenths of a gramme of mescalin, sat down and waited to see what would happen. When he opened his eyes everything, from the flowers in a vase to the creases in his trousers, was transformed. His account of his experience, and his vision for all that psychedelics could offer to mankind, has influenced writers, artists and thinkers around the world. The unabridged text of The Doors of Perception by Aldous Huxley VINTAGE MINIS: GREAT MINDS. BIG IDEAS. LITTLE BOOKS. A series of short books by the world's greatest writers on the experiences that make us human Also in the Vintage Minis series: Drinking by John Cheever Swimming by Roger Deakin Eating by Nigella Lawson Desire by Haruki Murakami
Visa hela texten

Concise, evocative, wise and, above all, humane, The Doors of Perception is a masterpiece * Sunday Times * Imagine our joy when Vintage announced that it is publishing a collection of easily digestible books from the world's most celebrated writers on the experiences that make us human... They look good and read well. That's win/win in our book. * Stylist *

Aldous Huxley was born on 26 July 1894 near Godalming, Surrey. He began writing poetry and short stories in his early 20s, but it was his first novel, Crome Yellow (1921), which established his literary reputation. This was swiftly followed by Antic Hay (1923), Those Barren Leaves (1925) and Point Counter Point (1928) - bright, brilliant satires in which Huxley wittily but ruthlessly passed judgement on the shortcomings of contemporary society. For most of the 1920s Huxley lived in Italy and an account of his experiences there can be found in Along the Road (1925). The great novels of ideas, including his most famous work Brave New World (published in 1932 this warned against the dehumanising aspects of scientific and material 'progress') and the pacifist novel Eyeless in Gaza (1936) were accompanied by a series of wise and brilliant essays, collected in volume form under titles such as Music at Night (1931) and Ends and Means (1937). In 1937, at the height of his fame, Huxley left Europe to live in California, working for a time as a screenwriter in Hollywood. As the West braced itself for war, Huxley came increasingly to believe that the key to solving the world's problems lay in changing the individual through mystical enlightenment. The exploration of the inner life through mysticism and hallucinogenic drugs was to dominate his work for the rest of his life. His beliefs found expression in both fiction (Time Must Have a Stop,1944, and Island, 1962) and non-fiction (The Perennial Philosophy, 1945; Grey Eminence, 1941; and the account of his first mescalin experience, The Doors of Perception, 1954. Huxley died in California on 22 November 1963.