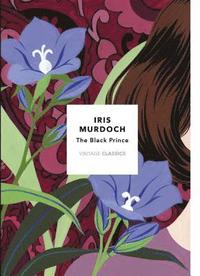 av Iris Murdoch
Häftad Engelska, 2019-07-04
129
Köp
Spara som favorit
Skickas inom 5-8 vardagar.
Fri frakt inom Sverige över 159 kr för privatpersoner.
VINTAGE CLASSICS MURDOCH: Funny, subversive, fearless and fiercely intelligent, Iris Murdoch was one of the great writers of the twentieth century. To celebrate her centenary Vintage Classics presents special editions of her greatest and most timeless novels. WITH AN INTRODUCTION BY SOPHIE HANNAH 'Every artist is an unhappy lover. And unhappy lovers want to tell their story.' Ex-tax collector and author of two unpopular novels, Bradley Pearson wishes to devote his retirement to writing a masterpiece. But the doorbell and the phone keep ringing, and every ring brings with it an ex-wife, a friend in need, a sister in trouble or a young woman seeking a teacher, and so dusty, selfish Bradley is plunged into the muddles and mysteries which will end in his doom. Winner of the James Tait Black Memorial Prize 1973.
Visa hela texten

This is great Murdoch. It rings as clear as The Bell...her humour is all the more achingly funny because she keeps it on the edge of our vision * Daily Mail * More than almost any other writer, she understands the currents beneath the surface: the way that inappropriate crushes, egotism, loathing, loneliness, can overcome apparently calm lives and leave disaster, even death, behind. -- Charlotte Mendelson * Guardian * A source of wonder and delight...No summary can do justice to the rich intricacy of character and incident with which Miss Murdoch crowds every page * Spectator * The book is so great, I almost feel it has magic powers. It's tragic, comic, mysterious, thought-provoking and so much more than the sum of its parts. It manages to be both a great detective story and a great love story at the same time. It's the only book I've ever read that feels as if it encapsulates all of life and the human experience. -- Sophie Hannah * New York Times * Murdoch is at the height of her powers in this novel, combining a complex plot with a heartrending analysis of the meaning of love * Good Book Guide *

Iris Murdoch was born in Dublin in 1919. She read Classics at Somerville College, Oxford, and after working in the Treasury and abroad, was awarded a research studentship in Philosophy at Newnham College, Cambridge. In 1948 she returned to Oxford as fellow and tutor at St Anne's College and later taught at the Royal College of Art. Until her death in 1999, she lived in Oxford with her husband, the academic and critic, John Bayley. She was made a Dame of the British Empire in 1987 and in the 1997 PEN Awards received the Gold Pen for Distinguished Service to Literature. Iris Murdoch made her writing debut in 1954 with Under the Net. Her twenty-six novels include the Booker prize-winning The Sea, The Sea (1978), the James Tait Black Memorial prize-winning The Black Prince (1973) and the Whitbread prize-winning The Sacred and Profane Love Machine (1974). Her philosophy includes Sartre: Romantic Rationalist (1953) and Metaphysics as a Guide to Morals (1992); other philosophical writings, including 'The Sovereignty of Good' (1970), are collected in Existentialists and Mystics (1997). Sophie Hannah is the internationally bestselling author of eight psychological thrillers, the most recent of which is The Carrier. Her crime novels featuring Simon Waterhouse and Charlie Zailer have been published in more than 25 countries, and adapted for ITV1 as Case Sensitive, starring Olivia Williams and Darren Boyd. In 2012, Sophie's novel Kind of Cruel was shortlisted for the Specsavers National Book Awards Crime Thriller of the Year, and in 2007 she was shortlisted for the TS Eliot Prize for her latest poetry collection, Pessimism for Beginners. She is a Fellow Commoner of Lucy Cavendish College, Cambridge, and her website is www.sophiehannah.com.