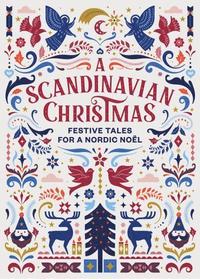 Festive Tales for a Nordic Noel

av Hans Christian Andersen, Karl Ove Knausgaard, Selma Lagerloef, Vigdis Hjorth
Inbunden Engelska, 2021-10-21
149
Köp
Spara som favorit
Ranging from Hans Christian Anderson to Karl Ove Knausgaard, have yourself a nordic noel with the very best Scandinavian Christmas tales Have yourself a truly Scandinavian Christmas... Of visions and prophesies seen in dark, dark woods. Of toys and trees come to life. Of trolls raising chaos, and of families torn apart -- only to be brought back together by festive cheer. In this collection, classic tales from Hans Christian Andersen and Nobel Prize winner Selma Lagerlof blend with modern day stories from Karl Ove Knausgaard and Vigdis Hjorth. Each touch on the warm and wild spirit of Christmas, where the cosiness and contentment of the season can often give way to the unexpected, magical and sometimes mystical. A smorgasbord of strange literary gifts, let A Scandinavian Christmas transport you to a winter wonderland in which fantasy, the fantastic and the festive combine for your reading delight. 'These evocative, atmospheric tales...capture the spirit of Christmas' Sunday Express
Visa hela texten

Hans Christian Andersen (April 2, 1805 - August 4, 1875) was a Danish author and poet, most famous for his fairy tales. Among his best-known stories are The Snow Queen, The Little Mermaid, Thumbelina, The Little Match Girl, The Ugly Duckling and The Red Shoes. During Andersen's lifetime he was feted by royalty and acclaimed for having brought joy to children across Europe. His fairy tales have been translated into over 150 languages and continue to be published in millions of copies all over the world. Karl Ove Knausgaard's My Struggle cycle has been heralded as a masterpiece all over the world. From A Death in the Family to The End, the novels move through childhood into adulthood and, together, form an enthralling portrait of human life. Knausgaard has been awarded the Norwegian Critics Prize for Literature, the Brage Prize and the Jerusalem Prize. His work, which also includes The Morning Star, Out of the World, A Time for Everything and the Seasons Quartet, is published in thirty-five languages. Selma Lagerloef (1858-1940) was a teacher in a girls' secondary school before she became a full-time writer. She is known around the world for her classic children's book The Wonderful Adventure of Nils Holgersson and she was the first female writer to win the Nobel Prize in 1909.