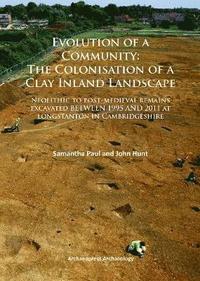 Evolution of a Community: The Colonisation of a Clay Inland Landscape

av Samantha Paul, John Hunt
Häftad Engelska, 2014-03-20
479
Köp
Spara som favorit
Skickas inom 7-10 vardagar.
Fri frakt inom Sverige för privatpersoner.
The movement of people from the fen edge and river valleys into the clay lands of eastern England has become a growing area of research. The opportunity of studying such an environment and investigating the human activities that took place there became available 9 km to the north-west of Cambridge at the village of Longstanton. The archaeological excavations that took place over a sixteen year period have made a significant contribution to charting the emergence of a Cambridgeshire clayland settlement and its community over six millennia. Evolution of a Community chronologically documents the colonisation of this clay inland location and outlines how it was not an area on the periphery of activity, but part of a fully occupied landscape extending back into the Mesolithic period. Subsequent visits during the Late Neolithic became more focused when the locality appears to have been part of a religious landscape that included a possible barrow site and ritual pit deposits. The excavations indicate that the earliest permanent settlement at the site dates to the Late Bronze Age, with the subsequent Iron Age phases characterised as a small, modest and inward-looking community that endured into the Roman period with very little evidence for disjuncture during the transition. The significant discovery of a group of seventh-century Anglo-Saxon burials which produced rare evidence for infectious deceases is discussed within the context of 'final phase' cemeteries and the influence of visible prehistoric features within the local landscape. The excavation of the Late Anglo-Saxon and medieval rural settlement defined its origins and layout which, alongside the artefactual and archaeobotanical assemblages recovered creates a profile over time of the life and livelihood of this community that is firmly placed within its historical context.
Visa hela texten

Samantha Paul is a Research Fellow in the Department of Classics, Ancient History and Archaeology, University of Birmingham. Her main interests lie mainly within the Iron Age, specifically looking at landscapes and how people lived, perceived and interacted with their environment. John Hunt is the author of the novel The Space Between the Space Between and is the co-founder of the advertising agency network TBWA\Hunt Lascaris and is currently Worldwide Creative Director of TBWA. In 1993 he was intimately involved in Nelson Mandela's first election campaign. The author of a number of television dramas, he was also named South African Playwright of the Year for Vid Alex. His book The Art of the Idea, which celebrates the power of ideas to move the world forward, has been translated into several languages. He lives and works in Johannesburg