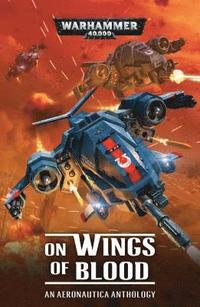 On Wings of Blood

Bloggat om On Wings of Blood

Matt Westbrook has written The Realmgate Wars: Bladestorm for Age of Sigmar, and the novel Medusan Wings for Warhammer 40,000. He lives and works in Nottingham. E J Davies, currently of Ottawa, is a writer, reviewer and gamer. When not wrangling words, in the curling rink, or supporting the losing side - still not convinced it was the wrong one - E J can be found teaching chemistry or buried in one of his other diverse hobbies. 'Sturmhex' is his first story for Black Library. J C Stearns is a writer who lives in a swamp in Illinois with his wife and son, as well as more animals than is reasonable. He started writing for Black Library in 2016 and is the author of the short story 'Wraithbound', as well as 'Turn of the Adder', included in the anthology Inferno! Volume 2 and 'The Marauder Lives', in the Horror anthology Maledictions. He plays Salamanders, Dark Eldar, Sylvaneth, and as soon as he figures out how to paint lightning bolts, Night Lords. Matt Smith is one of Black Library's newest authors, and the Warhammer 40,000 short story 'In Service Eternal' is his first. He is based in Norwich and spends his spare time working on his Raven Guard army and training in martial arts. Alec Worley is a well-known comics and science fiction and fantasy author, with numerous publications to his name. He is an avid fan of Warhammer 40,000 and has written many short stories for Black Library including 'Stormseeker', 'Whispers' and 'Repentia'. He has recently forayed into Black Library Horror with the audio drama Perdition's Flame and his novella The Nothings, featured in the anthology Maledictions. He lives and works in London. Nicholas Alexander has written the Astra Militarum short story 'The Trophy' and the Imperial Navy story 'The Emperor's Grace'. He lives and works in Cambridge, UK, and is a huge Space Wolves fan. Author of the Path of the Dark Eldar series and the related novella The Masque of Vyle, along with the Necromunda novel Survival Instinct and a host of short stories, Andy Chambers has more than twenty years' experience creating worlds dominated by war machines, spaceships and dangerous aliens. He lives and works in Nottingham.