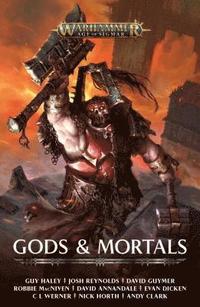 av Guy Haley, Andy Clark, David Annandale, Evan Dicken, David Guymer
Häftad Engelska, 2019-07-25
107
Köp
Spara som favorit
Skickas inom 3-6 vardagar.
Fri frakt inom Sverige för privatpersoner.
The storm has broken. Sigmar has returned to the Mortal Realms, and his eternal armies march across the lands, smiting the unworthy. This collection of short stories tells tales from the greatest battles of the realms. For too long, the Mortal Realms have suffered under Chaos' twisted crusade. Tainted lands writhe in agony and once great cities lie in ruins, the hopes of their people extinguished. But the storm winds rise. Sigmar's greatest creation, the Stormcast Eternals, strike with His vengeance. Their lightning drives the darkness away and their thunder drowns out the screams of the Foul Gods' acolytes as they fall to sword and halberd. The sons and daughters of the storm know they cannot fail. For now is the time where the fate of a world will be decided. Where Gods and mortals must rise and fight, or face their final damnation.
Visa hela texten

Andy Clark has written the Warhammer 40,000 novels Kingsblade, Knightsblade and Shroud of Night, as well as the novella Crusade and the short story 'Whiteout'. He has also written the novels Gloomspite and Blacktalon: First Mark for Warhammer Age of Sigmar, and the Warhammer Quest Silver Tower novella Labyrinth of the Lost. Andy works as a background writer for Games Workshop, crafting the worlds of Warhammer Age of Sigmar and Warhammer 40,000. He lives in Nottingham, UK. Evan Dicken's first story for Black Library was 'The Path to Glory', and he has since penned several more tales set in the Age of Sigmar, including the novella The Red Hours, and short fiction for the anthologies Gods & Mortals and Myths & Revenants. He has been an avid reader of Black Library novels since he found dog-eared copies of Trollslayer, Xenos and First and Only nestled in the 'Used Fantasy/Sci-fi' rack of his local gaming store. He still considers himself an avid hobbyist, although the unpainted Chaos Warband languishing in his basement would beg to differ. By day, he studies old Japanese maps and crunches data at The Ohio State University. Robbie MacNiven is a Highlands-born History graduate from the University of Edinburgh. He has written the Warhammer Age of Sigmar novel Scourge of Fate and Gotrek Gurnisson novella The Bone Desert, as well as the Warhammer 40,000 novels Blood of Iax, The Last Hunt, Carcharodons: Red Tithe, Carcharodons: Outer Dark and Legacy of Russ. His short stories include 'Redblade', 'A Song for the Lost' and 'Blood and Iron'. His hobbies include re-enacting, football and obsessing over Warhammer 40,000. C L Werner's Black Library credits include the Age of Sigmar novels Overlords of the Iron Dragon and The Tainted Heart, the novella 'Scion of the Storm' in Hammers of Sigmar, the Warhammer novels Deathblade, Mathias Thulmann: Witch Hunter, Runefang and Brunner the Bounty Hunter, the Thanquol and Boneripper series and Time of Legends: The Black Plague series. For Warhammer 40,000 he has written the Space Marine Battles novel The Siege of Castellax. Currently living in the American south-west, he continues to write stories of mayhem and madness set in the Warhammer worlds.