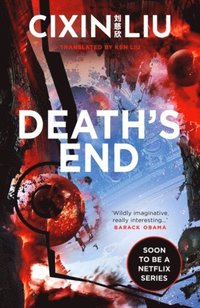 av Cixin Liu
(7 röster)  |  Läs 1 recension
Häftad Engelska, 2017-05-04
107
Köp
Spara som favorit
Finns även som
Visa alla 8 format & utgåvor
Read the award-winning, critically acclaimed, multi-million-copy-selling science-fiction phenomenon - soon to be a Netflix Original Series from the creators of Game of Thrones. Half a century after the Doomsday Battle, the uneasy balance of Dark Forest Deterrence keeps the Trisolaran invaders at bay. Earth enjoys unprecedented prosperity due to the infusion of Trisolaran knowledge and, with human science advancing and the Trisolarans adopting Earth culture, it seems that the two civilizations can co-exist peacefully as equals without the terrible threat of mutually assured annihilation. But peace has made humanity complacent. Cheng Xin, an aerospace engineer from the 21st century, awakens from hibernation in this new age. She brings knowledge of a long-forgotten program dating from the start of the Trisolar Crisis, and her presence may upset the delicate balance between two worlds. Will humanity reach for the stars or die in its cradle? Praise for The Three-Body Problem: 'Your next favourite sci-fi novel' Wired 'Immense' Barack Obama 'Unique' George R.R. Martin 'SF in the grand style' Guardian 'Mind-altering and immersive' Daily Mail Winner of the Hugo and Galaxy Awards for Best Novel
Visa hela texten

'Wildly imaginative, really interesting... The scope of it was immense' -- Barack Obama, 44th President of the United States 'The Three Body epic concludes with sweep and scope and majesty, worthy of Frederik Pohl or Poul Anderson, Scholar Wu or H.G. Wells. The universe is likely to be a rough neighborhood. See just how rough... and how life might still prevail' -- David Brin A breakthrough book... a unique blend of scientific and philosophical speculation, politics and history, conspiracy theory and cosmology, where kings and emperors from both western and Chinese history mingle in a dreamlike game world, while cops and physicists deal with global conspiracies, murders, and alien invasions in the real world' -- George R.R. Martin This is a series that I will always have on my book shelves because of the pleasure it gives to revisit it... Credit is also due to the translator, the extraordinary Ken Liu, for creating a read which enables all the high level concepts to weld with the ongoing epic story' * Strange Alliances * Complex and grandiose... this is a mind-altering and immersive experience' * Daily Mail * The grand scale continues in this third volume... There are many layers to this story, built up and woven together to form an extraordinarily grand tale of mankind's future. This volume brings the trilogy to a grand and satisfying conclusion' * SFCrowsnest * Cixin's trilogy is SF in the grand style, a galaxy-spanning, ideas-rich narrative of invasion and war between humanity and the alien 'Trisolarians' * Guardian * 'Even what doesn't happen is epic' * London Review of Books * 'The narrative and conceptual momentum of the series takes off at a scale and velocity I couldn't possibly have imagined before reading. The Three-Body trilogy makes insignificance and unknowability and futility seem so spiritually exciting that I felt breathless. I'd join a book club that just discusses it every month for a year' * New York Times. *