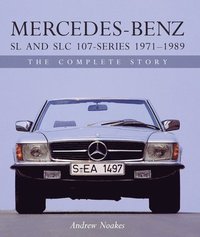 av Andrew Noakes
Inbunden Engelska, 2017-11-14
279
Köp
Spara som favorit
Skickas inom 3-6 vardagar.
Fri frakt inom Sverige för privatpersoner.
As one of the most remarkable models that Mercedes-Benz has ever created, the 107-series was a sales success for nearly two decades and has been an automotive icon for far longer. Elegant styling, effortless performance and superior build quality are central to the appeal of the Mercedes-Benz R107 SL and C107 SL models. This book details the complete history of the model from its design in the late 1960s, its launch in 1971, its development through the 1970s and 1980s to the end of production in 1989. Accompanied by over 250 archive pictures and original images, Mercedes-Benz SL and SLC 107-Series 1971-1989 - The Complete Story reveals the story behind the racing SLs and the works rally SLCs, and provides a valuable guide to buying and running these cars.
Visa hela texten

Andrew Noakes took a degree in automotive engineering at Loughborough University but decided to write about cars rather than design them. He was technical editor of Fast Car magazine in the 1990s and then founding editor of Classic magazine before going freelance in 2002. Since then he has written for numerous magazines and websites, including Classic & Sports Car, Classic Cars, Pistonheads, and ArsTechnica. He has also written or contributed to more than twenty car books including three for Crowood. Alongside his writing he is also course director for the MA Automotive Journalism course at Coventry University, and is chairman of the Guild of Motoring Writers.