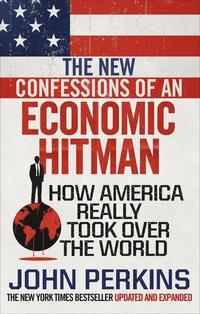 The New Confessions of an Economic Hit Man

How America really took over the world

av John Perkins
(1 röst)
Häftad Engelska, 2018-07-05
147
Köp
Spara som favorit
***THE WORD OF MOUTH INTERNATIONAL BESTSELLER NOW UPDATED WITH 15 EXPLOSIVE NEW CHAPTERS*** False economics. Threats, bribes, extortion. Debt, deception, coups, assassinations and unbridled military power. These are the tools used by the 'corporatocracy' - a vast network of corporations, banks, colluding governments and rich and powerful individuals - to ensure that they retain and expand their wealth and influence, growing richer and richer as the poor become poorer. In his original, post 9/11 book, John Perkins revealed how he was recruited as an economic hit man in the 1970s, and exposed the corrupt methods American corporations use to spread their influence in the developing world, cheating countries out of trillions of dollars. In this new, extensively updated edition he lays bare the latest, terrifying evolution of the economic hit man, and how the system has become even more entrenched and powerful than ever before. In New Confessions of an Economic Hit Man, John Perkins provides fresh and chilling evidence of how the corporatocracy has grown its influence to every corner of the globe, making us all unwitting slaves to their regime. But he also provides advice on how we can end our unconscious support of the system and its self-serving, lethal economy. ------------------------------------------------------------------------------------------------------ "Perkins has, once again, made a substantial contribution to a world that needs whistle-blowers to open its eyes to the true sources of political, social, and economic power" - Yanis Varoufakis "It comes from the heart. I highly recommend it." - Michael Brownstein "it's all here in toe-curling detail' - Guardian
Visa hela texten

Confessions of an Economic Hit Man is a unique book, brave because it is personal. With unflinching honesty, John Perkins narrates his moral awakening and struggle to break free from the corrupt system of global domination he himself helped to create. This book possesses an immediacy which separates it from the numerous studies we already have of American Empire. It comes from the heart. I highly recommend it. -- Michael Brownstein, author of World on Fire When I read Confessions of an Economic Hit Man, I could not have known that, some years later, I would be on the receiving end of the type of 'economic hit' that Perkins so vividly narrated ... Perkins has, once again, made a substantial contribution to a world that needs whistle-blowers to open its eyes to the true sources of political, social, and economic power -- Yanis Varoufakis, former Minister of Finance, Greece Must reading for those that know another world is possible! Perkins' story, however, is less about individual guilt and more about the systemic programming and tempting of males in patriarchal societies and their global power elites. Perkins' revelations shock us and illuminate how these same incentives in academia keep reproducing the compartmentalized worldviews and sophisticated economic models rationalizing inequity, greed, egotism, competitive self-interest and global expansionism via GDP-growth and debt. * Hazel Henderson, author of Beyond Globalization and Building a Win-Win World * I was hazy on the precise details of how third world debt came about, but after reading Confessions of an Economic Hit Man I consider myself rather better informed. And a lot more dismayed... it's all here in toe-curling detail * Guardian *

John Perkins was formerly Chief Economist at a major international consulting firm where he advised the World Bank, United Nations, the IMF, U.S. Treasury Department, Fortune 500 corporations, and governments in Africa, Asia, Latin America, and the Middle East. Since then, his books on economics, geo-politics, and indigenous cultures have sold more than 1 million copies. He is a founder and board member of Dream Change and The Pachamama Alliance, nonprofits devoted to establishing a world our children will want to inherit. www.johnperkins.org