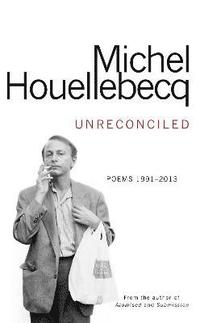 av Michel Houellebecq
Inbunden Engelska, 2017-01-12
167
Köp
Spara som favorit
Skickas inom 7-10 vardagar.
Fri frakt inom Sverige för privatpersoner.
Kan levereras innan jul!
Finns även som
Visa alla 1 format & utgåvor
Selected poems from the critically acclaimed author of Atomised and Submission Dual-language edition This selection of poems chosen from four collections shines a fresh light on Michel Houellebecq and emphasises the radical singularity of his work. Drawing on similar themes as his novels, Unreconciled is a journey into the depths of individual experience and universal passions. Divided into five parts, Unreconciled forms a narrative of love, hopelessness, catastrophe and, ultimately, redemption. In a world of supermarkets and public transport, Houellebecq manages to find traces of divine grace even as he exposes our inexorable decline into chaos. Told through forms and rhythms that are both ancient and new, with language steeped in the everyday, Houellebecq's vision of our era is one brimming with tensions that cannot - and will not - be reconciled.
Visa hela texten

Thoughts expertly condensed into verse. * Independent Daily Edition * Houellebecq's genius was to find out what his agony meant, to trace his personal fractures until they revealed the deepest traumas of a society and an age. No-one has been more interestingly unhappy than Houellebecq. * Irish Times * Houellebecq is perfectly suited to the age of Trump. * Guardian * Michel Houellebecq's latest English language poetry collection, Unreconciled, evokes a strange nostalgia. While this relentlessly downbeat collection is entirely composed of poems from between 1991 and 2013, it feels far older than that ... A must-read for the present day. * The Millions * When much modern poetry consists of trivial snapshots of daily life, it's invigorating to come on a poet who speaks of first and last things, of love and its disappointments of cheated hopes, of the rare pleasure of moments of beauty. * The Scotsman * All six of his [Houellebecq's] novels, beginning with Whatever in 1994, now look like contemporary classics. What's less well-known among his English-language readers is that he began his literary career as a poet ... In his poetry Houellebecq presents the shocks and absurdities of modern life not casually but with beautiful formality, in alexandrines worthy of his beloved Lamartine, or quatrains as precise and irrefutably rhymed as those of A E Housman, charting what is not to be endured. His poetry is often not only absolutely direct emotionally - contrary to his reputation as a misogynistic cynic, deeply romantic even - but also remarkably funny, deploying, as Novak-Lechevalier observes, an art of montage, "the brutal juxtaposition of heterogeneities" ... Michel Houellebecq is one of those writers who matters now, in his entirety, if any do. -- David Sexton * Evening Standard * Houellebecq's poetry opens a revealing window into a stubbornly consistent career. Readers who enjoy the dandyish despair of his fiction will not be shocked to find that, in poetry, Houellebecq channels masters such as Baudelaire - such a giant ghost here that he almost deserves a co-author's credit - and Verlaine . . . But who knew that, in English, Houellebecq could sound so much like Philip Larkin - or even John Betjeman.' -- Boyd Tonkin * The Arts Desk *

Michel Houellebecq is a poet, essayist and novelist. He is the author of several novels including The Map and the Territory (winner of the Prix Goncourt), Atomised, Platform, Whatever and Submission. He was awarded the Legion d'Honneur in 2019.