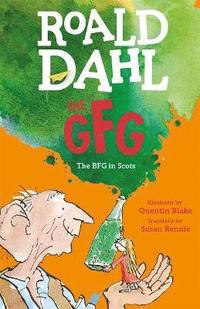 The Guid Freendly Giant (the BFG in Scots)

av Roald Dahl
Häftad Skotska, 2016-06-30
99
Köp
Spara som favorit
Skickas inom 5-8 vardagar.
Fri frakt inom Sverige över 159 kr för privatpersoner.
To celebrate the Roald Dahl centenary, we've translated one of Dahl's best-loved books into Scots for the very first time. And with the Spielberg movie also coming out this summer, this addition to Dahl Scots will be hugely popular, taking a new look at ahugely popular modern classic. Ae nicht, as the ither bairns sleep, Sophie is wheeched fae her bed in the orphanage by the muckle haund o a giant. Lucky for her, it belangs tae the Guid Freendly Giant. The GFG disna eat wee lassies. He jist eats foosty feechcumbers and drinks fuzzleglog. But there are ither giants that are no sae freendly and that snashter up slaversome human beans for their tea. Can Sophie an her new freend the GFG think on a sleekit ploy tae stap the likes o the Bluidsqueesher, the Girslegorbler, the Slaistermaister, an their hail ugsome clan?
Visa hela texten

The son of Norwegian parents, Roald Dahl was born in Wales in 1916 and educated at Repton. He was a fighter pilot for the RAF during World War Two, and it was while writing about his experiences during this time that he started his career as an author.His fabulously popular children's books are read by children all over the world. Some of his better-known works include James and the Giant Peach, Charlie and the Chocolate Factory, Fantastic Mr Fox, Matilda, The Witches, and The BFG. Dr Susan Rennie is a writer and lexicographer. She is currently a Lecturer in English and Scots Language at the University of Glasgow, where she also manages the Historical Thesaurus of Scots project. She was one of the original co-founders of Itchy Coo and has written several books in Scots for children, including Animal ABC, which won the 2002 TES/Saltire Society Award for Educational Publications, and The Derk Isle, the first Scots translation of Tintin.