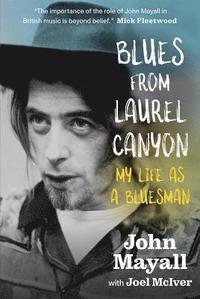 Blues From Laurel Canyon: My Life as a Bluesman

John Mayall: My Life As a Bluesman

av John Mayall, Joel Mciver
(1 röst)
Inbunden Engelska, 2019-09-26
209
Köp
Spara som favorit
Skickas inom 7-10 vardagar.
Fri frakt inom Sverige för privatpersoner.
John Mayall's story is like no other in the annals of rock and blues. Born in the UK in 1933, he laid the foundations of British blues, nurtured a generation of future superstars and then took the music back to the land of its birth. This extraordinary autobiography offers a vivid glimpse of Britain well before the rock revolution of the sixties, at a time when young men like John found themselves conscripted for national service that, in his case, included eighteen months in Korea. What followed when he returned was an odyssey of musical trail-blazing. From Manchester to Laurel Canyon and many points in between, John's account of his long life is both affectionate and compelling - a guided tour through more than sixty years of the music business and its stars, brought to vivid life by one of its undisputed pioneers.
Visa hela texten

Bloggat om Blues From Laurel Canyon: My Life as a Bl...

For over 50 years, John Mayall has served as a pioneer of blues music, rightly earning him the title, "The Godfather of British Blues." In 2013, John signed with producer Eric Corne's label, Forty Below Records, and has since been experiencing a true artistic and career renaissance, including a Blues Hall of Fame induction in 2015. Joel McIver is a British author. The best-known of his books is the best-selling Justice For All: The Truth About Metallica, first published in 2004 and appearing in nine languages since then. McIver's other works include biographies of Black Sabbath, Slayer, Ice Cube and Queens Of The Stone Age, all published by Omnibus Press.