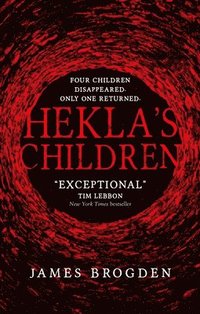 av James Brogden
Häftad Engelska, 2017-03-07
109
Köp
Spara som favorit
Skickas inom 7-10 vardagar.
Fri frakt inom Sverige över 159 kr för privatpersoner.
Kan levereras innan jul!
Finns även som
Visa alla 1 format & utgåvor
A decade ago, teacher Nathan Brookes saw four of his students walk up a hill and vanish. Only one returned - Olivia - starved, terrified, and with no memory of where she'd been. After a body is found in the same woodland where they disappeared, it is first believed to be one of the missing children, but is soon identified as a Bronze Age warrior, nothing more than an archaeological curiosity. Yet Nathan starts to have terrifying visions of the students. Then Olivia reappears, half-mad and willing to go to any lengths to return the corpse to the earth. For he is the only thing keeping a terrible evil at bay...
Visa hela texten

A terrific novel, really well written. Hekla's Children is a brilliant novel full of great twists, beautifully drawn characters, exceptional writing, and some really startling ideas. It will leave you questioning the truths of myth and history, and that fine knife-edge between personal perception and reality - Tim Lebbon, New York Times bestselling author; Hekla's Children marks the emergence on to a vibrant horror scene of an exciting new talent. James Brogden offers us a compulsive and unpredictable page-turner in which the ancient and modern world clash with devastating effect. Engaging characters, mind-bending concepts and enthralling set pieces propel the reader through a story in which the stakes are high and nothing can be taken for granted. Terrific stuff! - Mark Morris, British Fantasy Award Winner; Brogdan's words have a way of getting under your skin. From the brilliantly creepy first line to the haunting last Hekla's Children had me in its thrall. There's some dark, sinister magic going on in these pages. Brogdan's strength is that he knows there is beauty in that darkness, and that makes him one of the most compelling new voices out there. If you've read this far I've got one thing left to say to you: read Hekla's Children and forget about sleeping soundly for a while.- Steven Savile, bestselling author of Silver;Hekla's Children is at once a very modern dark fantasy, which also harks back to the classics of the genre. Like an irresistible mix of Masterton, Simmons and Gaiman, this novel marks Brogden out as a new rising star. With characters who feel completely real, an intriguing and original story containing mysteries that will keep you turning the pages to the end, and a mythology that includes a place called The Un - which I totally fell in love with - this one's definitely a winner! - PAUL KANE, BESTSELLING AUTHOR OF HOODED MAN;Places James Brogden in the company of Neil Gaiman, Tim Lebbon and Joe Hill... for me there was also a strong and pleasing likeness to the magical dream-states of Robert Holdstock. James Brogden has a penchant for the darker side of ancient myth and his knowledge of folklore woven into the fabric of Hekla's Children makes for a riveting read-JAN EDWARDS, BRITISH FANTASY AWARD WINNER;I thoroughly enjoyed it. It's deliciously dark and twisty and filled with toothy menace. A real pleasure to read-REN WAROM, AUTHOR OF ESCAPOLOGY

James Brogden is the author of The Narrows, Tourmaline and The Realt. His horror and fantasy stories have appeared in anthologies and periodicals ranging from The Big Issue to the British Fantasy Society Award-winning Alchemy Press. He spent many years living in Australia, but now lives in Bromsgrove, Worcestershire with his wife and two daughters.