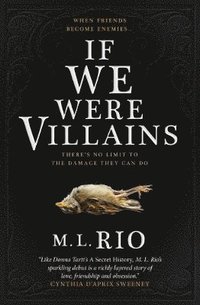 If We Were Villains

av M L Rio
(4 röster)  |  Läs 2 recensioner
Häftad Engelska, 2017-06-13
105
Köp
Spara som favorit
Finns även som
Visa alla 4 format & utgåvor
A vivid and immersive story of obsession perfect for fans of dark academia and Donna Tartt's The Secret History Oliver Marks has just served ten years for the murder of one of his closest friends - a murder he may or may not have committed. On the day he's released, he's greeted by the detective who put him in prison. Detective Colborne is retiring, but before he does, he wants to know what really happened ten years ago. As a young actor studying Shakespeare at an elite arts conservatory, Oliver noticed that his talented classmates seem to play the same roles onstage and off - villain, hero, tyrant, temptress - though Oliver felt doomed to always be a secondary character in someone else's story. But when the teachers change up the casting, a good-natured rivalry turns ugly, and the plays spill dangerously over into life. When tragedy strikes, one of the seven friends is found dead. The rest face their greatest acting challenge yet: convincing the police, and themselves, that they are blameless.
Visa hela texten

M.L. Rio was born in Miami, and has just competed her MA in Shakespeare Studies at King's College London. In 2016 she won a contest to stay in Hamlet's Castle at Elsinore for the 400th anniversary of Shakespeare's death, where she was the first person to sleep in the castle in over 100 years. If We Were Villains is her debut novel.