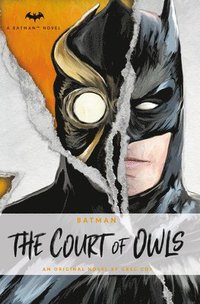 Batman: The Court of Owls

av Greg Cox
Inbunden Engelska, 2019-02-19
189
Köp
Spara som favorit
Skickas inom 5-8 vardagar.
Fri frakt inom Sverige för privatpersoner.
An original novel pitting Batman against the Court of Owls, a secret society of wealthy families that's controlled Gotham for centuries using murder and money. Beware the Court of Owls, that watches all the time Ruling Gotham from a shadowed perch, behind granite and lime They watch you at your hearth, they watch you in your bed Speak not a whispered word about them, or they'll send the Talon for your head. --a nursery rhyme The Court of Owls is a criminal secret society that has existed in Gotham City since the 1600s, led by some of the city's wealthiest and most influential families. They employ deadly trained assassins known as Talons, taken as children from circuses such as the one where Dick Grayson's parents were killed. These children are trained to become the assassins known as Talons. Bruce Wayne came to the Court's attention when he announced plans to reinvigorate Gotham, threatening their control. They sentenced him to death, bringing themselves to the attention of Batman. Though they suffer defeats, the Court continues to fight to retake control of the city's underworld - a fight that has gone on for centuries. Copyright (c) 2017 DC Comics. BATMAN, THE COURT OF OWLS, and all related characters and elements (c) & TM DC Comics and Warner Bros. Entertainment Inc.
Visa hela texten

"Anyone not indulging their inner Dark Knight by investigating Titan Books and DC Comics' current line of Batman prose novels is missing out on some of the best genre writing available." - SyFy "a finely constructed mystery for Batman comics readers up for a new twist on Batman, for fans of NBC's Gotham series, and fans of the New 52 in particular" - Borg.com "an example of the best of classic Batman, weaving the elements that are most treasured by fans into its fast-paced and intricate plot" - The BiblioSanctum "a worthy follow up to the original story and I hope that Greg Cox isn't finished playing in the world of Batman and with the Court of Owls" - The Batman Universe "Overall, I really enjoyed Batman: The Court of Owls. The story was interesting and engaging, the characters were fully realized, and it left me wanting more in the end" - Geekisphere "With his contribution to the DC Comics Novels line-up, Greg Cox has delivered something focused, interesting and entertaining, which will be an enjoyable read for any Batman fan" - Eggplante "An enjoyable novel from start to finish... I literally could not put this book down, especially with all its intricate twists and surprises that I encountered along the way." - Impulse Gamer

Greg Cox is a New York Times bestselling author known for novels tying into some of the most successful franchises in media today, including Star Trek, Planet of the Apes, Terminator, and Godzilla. He's contributed some of the most popular prose novels involving the DC Universe, from the sweeping mega-series 52, Countdown, and Final Crisis to the blockbuster movie tie-ins Batman: The Dark Knight Rises and Man of Steel.