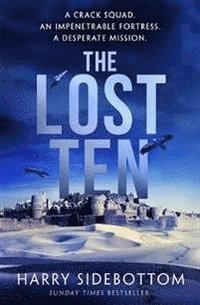 av Harry Sidebottom
Häftad Engelska, 2019-10-31
99
Köp
Spara som favorit
Finns i lager! Skickas inom 1-2 vardagar.
Fri frakt inom Sverige över 159 kr för privatpersoner.
Finns även som
Visa alla 2 format & utgåvor
A ragtag group of elite Roman soldiers are sent on a suicide mission in this epic historical thriller from Sunday Times bestseller and leading Ancient Rome expert, Harry Sidebottom. ____________________ No man who enters the Castle of Silence ever walks out alive. A remote fortress prison set high in the mountains, escape is impossible - and to break someone out, unthinkable. But this is exactly what Roman officer Marcus Aelius Valens must do. Tasked with rescuing the young Prince Sasan, Valens leads a small, elite squad of soldiers across Mesopotamia and into the mountains south of the Caspian Sea. As they journey deeper into enemy territory, the ten begin to die or disappear, one by one. And with the rescue fast becoming a suicide mission, Valens must marshal this disparate group of men - or suffer the same fate as all those who have made the journey before him... From the bestselling author of The Last Hour, The Lost Ten is a breathless historical thriller that will keep you on the edge of your seat - for fans of Bernard Cornwell, Ben Kane, Simon Scarrow and Conn Iggulden. ____________________ Praise for Harry Sidebottom 'Relentless, brutal, brilliant, this is Jack Reacher in ancient Rome' - Ben Kane 'A cracking tale. More twists and turns than the Tiber itself' - Rory Clements 'Absorbing, rich in detail and brilliant' - THE TIMES 'Grabbed me from the start. I loved it' - Donna Leon ________________________ *** GET READY FOR THE RETURN IN 2020 - HARRY SIDEBOTTOM'S BREAKOUT HISTORICAL THRILLER IS NOW AVAILABLE TO PRE-ORDER IN HARDBACK, EBOOK & AUDIOBOOK ***
Visa hela texten

Harry Sidebottom teaches Ancient History at Oxford University. His career as a novelist began with his Warrior of Rome series, which has sold over half a million copies. His next series, Throne of Caesars, was equally acclaimed. The Last Hour, his tenth novel, introduced us once again to Marcus Clodius Ballista, hero of the Warrior of Rome books. The Lost Ten is his eleventh novel. Harry's new breakout historical thriller The Return is available to pre-order now in hardback, eBook and audio.