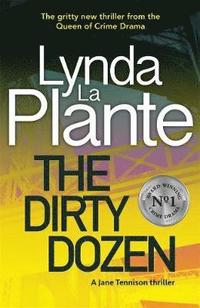 av Lynda La Plante
Häftad Engelska, 2020-01-23
119
Köp
Spara som favorit
Skickas inom 5-8 vardagar.
Gratis frakt inom Sverige över 159 kr för privatpersoner.
Finns även som
Visa alla 4 format & utgåvor
The gritty new thriller from the Queen of Crime Drama and the fifth book in the Sunday Times bestselling Jane Tennison series. Jane Tennison has worked hard to become the first female detective ever post to the infamous Flying Squad, or 'the Sweeney'. But the Dirty Dozen is a notorious boys' club, and Jane's new colleagues make it clear that they don't think a woman is up to the dangers of the job. Dealing with some of London's most ruthless armed criminals, who think the only good cop is a dead cop, is no joke. Determined to prove she's as good as the men, Jane discovers from a reliable witness that a gang is going to carry out a massive robbery. But she doesn't know who they are, or where and when they will strike . . . Praise for Lynda La Plante 'Lynda La Plante practically invented the thriller' Karin Slaughter 'Classic Lynda - a fabulous read' Martina Cole 'Satisfyingly full of twists and turns' The Independent 'A rare ring of authenticity' Sunday Telegraph 'An absorbingly twisty plot' Guardian
Visa hela texten

Lynda La Plante was born in Liverpool. She is the author of nearly forty novels, all of which have been bestsellers. She trained for the stage at RADA and worked with the National theatre and RDC before becoming a television actress. She then turned to writing - and made her breakthrough with the phenomenally successful TV series Widows. Lynda's original script for the much-acclaimed Prime Suspect won awards from BAFTA, Emmys, British Broadcasting and Royal Television Society as well as the 1993 Edgar Allan Poe Award. Lynda is an honorary fellow of the British Film Institute and was awarded the BAFTA Dennis Potter Best Writer's Award in 2000. In 2008, she was awarded a CBE in the Queen's Birthday Honours List for services to Literature, Drama and Charity. Lynda La Plante is the first lay person to be awarded an honorary fellowship to the Forensic Science Society. In 2020 she launched the acclaimed Listening to the Dead podcast with former CSI Cass Sutherland, exploring forensic science and its impact on solving crimes.