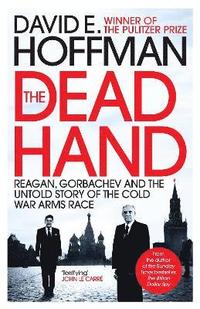 Reagan, Gorbachev and the Untold Story of the Cold War Arms Race

'A stunning feat of research and narrative. Terrifying.' -- John le Carre ''The Dead Hand' is a brilliant work of history, a richly detailed, gripping tale that takes us inside the Cold War arms race as no other book has...a story so riveting and scary that you feel like you are reading a fictional thriller.' -- Rajiv Chandrasekaran, author of 'Imperial Life in the Emerald City' 'An extraordinary achievement.' -- Sir Michael Dobbs 'This is a tour de force of investigative history.' -- Steve Coll 'A thought-provoking book which reads like a thriller. A gripping chronicle of the second half of the last century and a brilliant analysis of the single strategic conflict that more than any other shaped today's world.' -- Gordon Thomas, author of 'Inside British Intelligence and Gideon's Spies' 'I found 'The Dead Hand' extremely stimulating. As a Foreign Office Minister I was involved in Gorbachev's meeting with Margaret Thatcher; and as Defence Secretary from 1992-95 I was very much associated with the safe removal of post-Soviet states' nuclear weapons. This book is an excellent history of that period.' -- Sir Malcolm Rifkind, MP 'This book, which won the 2010 Pulitzer Prize for general non-fiction and is soon to be published in the UK, is in the best traditions of American long-form reportage... Key characters are evoked in enough detail to make us care and then carry the narrative through to the end. It involves simplifications and elisions: but in this case, these are less important than the horrified fascination Hoffman - a former Washington Post Moscow correspondent, later foreign editor - succeeds in rousing through a story at once journalistically detailed and morally alive.' -- John Lloyd, FT 'Hoffman's magisterial, human, vividly readable account of a remarkable time doesn't stop in 1991.' -- Peter Preston, Guardian '[Hoffman] has compiled a fascinating narrative of the last phase of the cold war and the era of Mikhail Gorbachev, glasnost and perestroika, which ended amid the collapse of the Soviet Union.' -- Max Hastings, Sunday Times 'This is an important well-written volume that makes a major contribution to our understanding of the last decade of the Cold War and its aftermath.' -- Christopher Andrew, Literary Review '['The Dead Hand'] has important things to say... It is exceptionally well informed. Anyone interested in the Cold War will learn something new from this fascinating, if rather depressing, read.' -- BBC History Magazine 'If you like your history told James Bond style, you'll love this book.' -- Simon Heffer, Daily Telegraph 'David E. Hoffman bagged a Pulitzer for 'The Dead Hand: Reagan, Gorbachev and the Untold Story of the Cold War Arms Race' (Icon Books, EURO11.99). The book reads with the pace of a political thriller and includes wonderful insight into the relationship between the Cold War's two central characters who managed to pull their empires back from the brink at a time when they shared an arms arsenal with the explosive power of 1 million Hiroshimas.' -- Irish Examiner 'Authoritative and chilling ... a readable, many-tentacled account of the decades-long military standoff between the United States and the Soviet Union ... The Dead Hand is deadly serious, but this story can verge on pitch-black comedy - Dr. Strangelove as updated by the Coen Brothers.' -- New York Times

David Hoffman is a contributing editor at the Washington Post, where he previously served as White House correspondent, Moscow bureau chief, and assistant managing editor for foreign news.