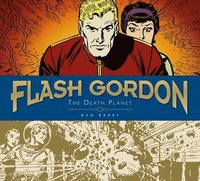 av Dan Barry
(2 röster)
Inbunden Engelska, 2017-09-12
429
Köp
Spara som favorit
Skickas inom 3-6 vardagar.
Fri frakt inom Sverige för privatpersoner.
Following the death of Mac Raboy in 1968, Dan Barry took over production of the Sunday Flash Gordon strip. This collection, the first ever, features the first three years of a run that would last for nearly 50 years from The Return of Chameleon 1/14/68, which he completed after Raboy's death, to Radiation Giants in 12/26/71.
Visa hela texten

Born in 1923, Dan Barry's long career in comics began in 1941 working for the Funnies Inc. Comic. He would go on to work for Timely, Feature Comics and Fawcett. Following his national service in the US airforce, Barry returned to comics assisting Burne Hogarth on Tarzan newspaper strip before taking over the daily strip in 1947. In 1951 he was hired to revive the Flash Gordon daily strip and in 1968 he took over the Sunday strip too. He would continue to draw Flash Gordon for nearly 50 years and would continue to draw comics right up to his death in 1997 at the age of 74.