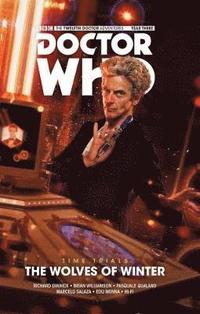 Doctor Who: The Twelfth Doctor - Time Trials Volume 2: The Wolves of Winter

av Richard Dinnick
Häftad Engelska, 2018-03-06
169
Köp
Spara som favorit
Skickas inom 5-8 vardagar.
Fri frakt inom Sverige för privatpersoner.
In Bill's first comic adventure, the TARDIS crashes into the heart of a Viking camp! But this is no interactive history lesson, and it seems that a terrifying alien force has taken hold over the icy kingdom. As the snow melts, the Doctor realises that he is about to face an unwelcome face from the past...And in a one-shot adventure, the Doctor takes Bill and Nardole on a trip to an intergalactic supermarket, where they make an unexpected new friend! Collects Doctor Who: The Twelfth Doctor Year Three #5-7 and #9.
Visa hela texten

Richard Dinnick is a screenwriter, novelist, comic writer and audio playwright. He has written for the BBC, including on Doctor Who, and was a BAFTA Judge in 2014. Brian Williamson is a comic book artist and illustrator who lives in London. He has worked on Spiderman, X-Men and New Avengers for Marvel, and Torchwood, Doctor Who and Warhammer 40,000 for Titan Comics. Pasquale Qualano is an Italian artist who has worked on titles such as Marvel's She Hulk and Guardians of the Galaxy, and DC's Harley Quinn Roadtrip, DC Bombshells, and Batman 66.