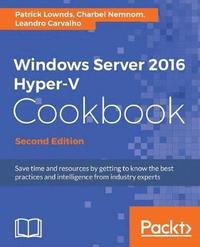 av Patrick Lownds, Charbel Nemnom, Leandro Carvalho
Häftad Engelska, 2017-01-18
629
Köp
Spara som favorit
Save time and resources by getting to know the best practices and intelligence from industry experts About This Book * This book helps you gain a fresh perspective through a recipe-based approach on the new Microsoft Server 2016 Hyper-V * Over 80 recipes to help you master the administrative tasks of Hyper-V and get to grips with advanced solutions and techniques for virtualization * These hands-on advanced recipes will help you deploy, maintain, and upgrade Hyper-V virtual machines Who This Book Is For This book is for Hyper-V administrators who are looking to take advantage of all exciting new features that Microsoft Server 2016 Hyper-V has to offer. What You Will Learn * Installing and managing Hyper-V Server in Full, Server Core, and Nano Server * Migrating and upgrading physical and virtual machines * Configuring network, memory, security, and auditing settings for virtual machines * High availability and disaster recovery * Saving time and money with PowerShell automation * The new features around network and nested virtualization, distributed storage QoS, Hyper-V Replica, and much more * Monitoring, reporting, and troubleshooting with Hyper-V 2016 best practices * Deploying and automating multiple VMs and support Windows Hyper-V 2016 clusters through different installation methods In Detail Hyper-V 2016 is full of new features and updates. The second of our best-selling Hyper-V books, the Windows Server 2016 Hyper-V Cookbook has it all covered. Brimming with expert solutions and techniques, you'll have everything you need to master virtualization and Hyper-V Manager. This Hyper-V book is designed to help advanced-level administrators benefit fully from the new Windows Server. With over 80 hands-on recipes, the Hyper-V Cookbook gives you tips, tricks and best practices to deploy, maintain and upgrade your virtual machines. Style and approach This advanced-level book provides step-by-step recipes on real-world examples so you can get practical, hands-on experience of the subjects.
Visa hela texten

Patrick Lownds is a Master level Solution Architect working for TS Consulting WW, in the Cloud Professional Services practice, for Hewlett-Packard Enterprise, and is based out of London (UK). Patrick is also a current Microsoft Most Valuable Professional (MVP) for Cloud and Datacenter Management (CDM) and has worked in the IT industry since 1988 on various technologies, including Windows Server Hyper-V, System Center, Windows Azure Pack, and Microsoft Azure. In his current role, he works mainly with the most recent versions of Windows Server, Microsoft Azure Stack, and Microsoft Azure. Although, Patrick's current area of personal interest is Windows Containers and Docker. Patrick has participated in the Windows Server 2016 and System Center 2016 Continuous Customer Engagement Program (CCEP) and Azure Stack Early Adoption Initiative Program. Patrick has previously contributed to a number of books entitled Mastering Hyper-V Deployment, Microsoft Private Cloud Computing and Windows Server 2012 Hyper-V Installation and Configuration Guide. All of which were published by Wiley and Sybex. He blogs and tweets in his spare time and can be found on Twitter as @patricklownds. When not consulting, speaking, writing or researching, he can be found on a rugby pitch teaching contact rugby to children of various ages. Charbel Nemnom is a Microsoft Most Valuable Professional (MVP) for Cloud and Datacenter Management (CDM) and a Technical Evangelist for 5nine Software and Unidesk Coporation. Charbel has extensive Infrastructure expertise and a vast knowledge of a variety of Microsoft and VMware technologies. He has over fifteen years of professional experience in the Information Technology field and guiding technical teams to optimize the performance of mission-critical enterprise systems. He has worked as a system and network engineer, senior consultant, and as regional technical manager and has a history of successful enterprise projects in the IT, banks, education, and publishing sectors. He works as a Virtualization Consultant and Architect in the MENA region. He authored Getting Started with Windows Nano Server, co-authored Windows Server 2016 Hyper-V Cookbook, Second Edition, and reviewed Hyper-V Best Practices books (Packt Publishing). Charbel also runs his blog at (https://charbelnemnom.com) where he blogs frequently about Software Defined Datacenter and Cloud Computing. Charbel is Microsoft, Cisco, and VMware certified and holds the following credentials: VCA-DCV, MCP, MCSA, MCTS, MCITP, MCS, MCSD, MCSE, CCNP, ITIL (R), and PMP (R). You can also follow him on Twitter @CharbelNemnom. Leandro Carvalho works as Microsoft specialist with products such as Windows Server, Hyper-V, Public and Private Cloud, Office 365, Security, System Center, Exchange, Sharepoint, Project Server and client systems, in addition to helping the community constantly with articles, forums, videos and lectures about his passion: Microsoft Virtualisation and Cloud Computing. He has been speaking in large events such as MMS, Teched Australia, MVP Pro Speaker Series and many others and is the author of the Windows Server 2012 Hyper-V Cookbook. Leandro has been working as Microsoft trainer since 2006 and has obtained the certifications Certified Ethical Hacker/MCP/MCSA+M+S/MCSE+S/MCTS/MCITP/MCT and MVP. In 2009 he received the MCT Awards Latin America Trainer of the year and since 2009 the Microsoft MVP as a Virtualisation Specialist.