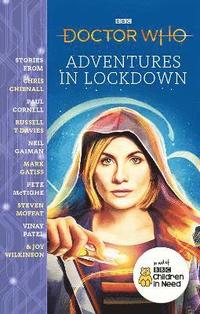 Doctor Who: Adventures in Lockdown

av Chris Chibnall, Paul Cornell, Russell T Davies, Neil Gaiman, Mark Gatiss
Häftad Engelska, 2020-11-05
119
Köp
Spara som favorit
Skickas inom 5-8 vardagar.
Gratis frakt inom Sverige över 159 kr för privatpersoner.
Darkness Never Prevails. While staying home was a vital safety measure in 2020, the freedom of the TARDIS remained a dream that drew many - allowing them to roam the cosmos in search of distraction, reassurance and adventure. Now some of the finest TV Doctor Who writers come together with gifted illustrators in this very special short story collection in support of BBC Children in Need. Current and former showrunners - Chris Chibnall Russell T Davies and Steven Moffat - present exciting adventures for the Doctor conceived in confinement, alongside brand new fiction from Neil Gaiman, Mark Gatiss and Vinay Patel. Also featuring work from Chris Riddell, Joy Wilkinson, Paul Cornell, Sonia Leong, Sophie Cowdrey, Mike Collins and many more, Adventures in Lockdown is a book for any Doctor Who fan in your life, stories that will send your heart spinning wildly through time and space... GBP2.25 from every copy sold in the UK of Doctor Who: Adventures in Lockdown will benefit Children in Need (registered charity number 802052 in England & Wales and SC039557 in Scotland)
Visa hela texten

Paul Cornell has written some of Doctor Who's best-loved episodes for the BBC, as well as the novel Doctor Who: Nemesis of the Daleks with Dan Abnett. He has also written on a number of comic book series for Marvel and DC, including X-men and Batman and Robin. He has been Hugo Award-nominated for his work in TV, comics and prose, and won the BSFA award for his short fiction. Russell T Davies is one of the UK's foremost writers of television drama, creating ground breaking shows such as Queer As Folk, Bob & Rose, Casanova, Cucumber, The Second Coming, and in 2018, A Very English Scandal for BBC One. He has been Head Writer and Executive Producer of Doctor Who since it returned to the BBC in 2005 and has written many of the new series' most memorable episodes. He was awarded an OBE in 2008 for services to drama. He divides his time between Cardiff and Manchester. Gaiman is the New York Times bestselling author of the novels Neverwhere (1995), Stardust (1999), the Hugo and Nebula Award-winning American Gods (2001), Anansi Boys (2005), and Good Omens (with Terry Pratchett, 1990), as well as the short story collections Smoke and Mirrors (1998) and Fragile Things (2006). His screenwriting credits include the original BBC TV series of Neverwhere (1996), Dave McKean's first feature film, Mirrormask (2005), the Doctor Who episode 'The Doctor's Wife' (2011) and, of course, the forthcoming 'Good Omens' TV series. Mark Gatiss is a screenwriter, director, producer and actor. He is one member of The League of Gentlemen and has written for and acted in Doctor Who, Sherlock (the latter of which he co-created with Steven Moffat along with the acclaimed miniseries Dracula) and many others. Steven Moffat is best known for Press Gang, Coupling, Steven Spielberg's movie Tintin, and for the last few years being lead writer and executive producer on Doctor Who and for co-creating and co-writing (with Mark Gatiss) and executive producing Sherlock. He has 5 BAFTAs, 2 Emmys and in 2015 was awarded an OBE for services to drama. Vinay Patel is a playwright and screenwriter. His television debut was the BAFTA-winning Murdered By My Father and for Doctor Who he has written Demons of the Punjab. His latest play, An Adventure, ran at the Bush Theatre in 2018. Elsewhere, he contributed to the bestselling collection of essays, The Good Immigrant. Joy Wilkinson is an award-winning writer working across film, television, theatre and radio. As well as Doctor Who her TV credits include Nick Nickleby and The Watch. Her directing debut - the film Ma'am - is released in 2020.