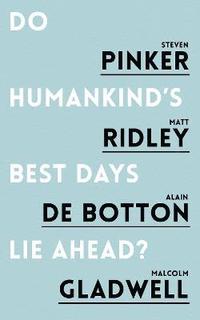 Do Humankind's Best Days Lie Ahead?

av Steven Pinker, Matt Ridley, Alain De Botton, Malcolm Gladwell
Häftad Engelska, 2016-11-03
106
Köp
Spara som favorit
Finns även som
Visa alla 1 format & utgåvor
'It's just a brute fact that we don't throw virgins into volcanoes any more. We don't execute people for shoplifting a cabbage. And we used to.' -Steven Pinker 'The idea that because things have gotten better in the past they will continue to do so in the future is a fallacy I would have thought confined to the lower reaches of Wall Street.' -Malcolm Gladwell In a world driven by technology and globalization, is humanity approaching a Golden Age or is the notion of progress a Western delusion? Four of the world's most renowned thinkers take on one of the biggest debates of the modern era...
Visa hela texten

STEVEN PINKER is a pioneering cognitive scientist who has written a number of of bestselling and award-winning books. He is Johnstone Family Professor of Psychology at Harvard and has been named by Time magazine as one of the "100 Most Influential People in the World." MATT RIDLEY's books have been finalists for nine major literary prizes and sold over one million copies. He was appointed to the House of Lords in 2013 and is a fellow of the Royal Society of Literature and the Academy of Medical Sciences. ALAIN DE BOTTON is a philosopher who has written about love, travel, architecture, and literature. His books have been bestsellers in thirty countries. De Botton also started and helps to run the London-based School of Life. MALCOLM GLADWELL is a Canadian journalist and the author of five New York Times bestsellers. He has been named one of the "100 Most Influential People in the World" by Time magazine and one of Foreign Policy magazine's "Top 100 Global Thinkers."