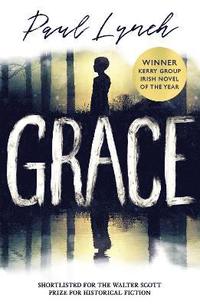 Winner of the Kerry Group Irish Novel of the Year

av Paul Lynch
Häftad Engelska, 2018-06-07
139
Köp
Spara som favorit
Skickas inom 3-6 vardagar.
Gratis frakt inom Sverige över 159 kr för privatpersoner.
Finns även som
Visa alla 2 format & utgåvor
WINNER OF THE KERRY GROUP IRISH NOVEL OF THE YEAR 2018 SHORTLISTED FOR THE WALTER SCOTT PRIZE FOR HISTORICAL FICTION, THE WILLIAM SAROYAN INTERNATIONAL PRIZE FOR WRITING 2018 & FRANCE'S PRIX LITTERATURE MONDE (2019) SELECTED AS A BEST BOOK OF THE YEAR 2017 BY THE GUARDIAN AND ESQUIRE Winter is closing in and Ireland is in the grip of famine. Early one October morning, Grace's mother snatches her from sleep, brutally cuts her hair and tells her: 'You are the strong one now.' Her mother fits her up in men's clothes and casts her out, as she is no longer safe at home. With her younger brother Colly in tow, the two set off on a remarkable journey against the looming shadow of their country's darkest hour.
Visa hela texten

'The Irish writer's third novel raises timeless questions about suffering and survival through the story of two children expelled from their impoverished home in the midst of the Great Famine. When you're starving, Lynch seems to be asking, are you truly alive?' * Editors' Choice, <i>The New York Times Book Review</i> * 'This book is one of the most beautiful I have read in a long time. Heart wrenching and so moving, with language that makes your soul sing.' * Caitriona Balfe, actress and star of <i>Outlander</i> * 'Grace is a moving work of lyrical and at times hallucinatory beauty...that reads like a hybrid of John Steinbeck's The Grapes of Wrath and Cormac McCarthy's The Road.' * <i>Washington Post</i> * 'A profound and unusual coming-of-age story.' * <i>Sunday Times</i> * 'A shudderingly well written, dead-real, hallucinatory trip across Famine Ireland.' * Emma Donoghue, author of <i>Room</i> * 'Haunting and poetic... Lynch has given us poignant glimpses of the human body's limits, that peculiar messiness of identity, and what happens when parts of a society fail to help, or even acknowledge, those in need.' * <i>Irish Times</i> * 'The newly crowned winner of the Kerry Group Irish Novel of the Year award... Lynch's book is a celebration of the human spirit in even the most trying of circumstances and the steps we take to ensure our survival.' * <i>Irish Independent</i> * 'It's not just style that makes this an unforgettable book. Its heroine, 14-year-old Grace, may not have much to say for herself, but her younger brother, Colly, is a gleefully riddling, smutty delight. Separated by a tragedy soon after they are expelled from home to fend for themselves, Colly's irresistible voice continues to ring in Grace's ears. What ensues is full of incident and grotesques, fizzing with adventure, a counter to the enervating effects of their starvation. But gradually it becomes a darker book as hunger eats away at humanity - and the darker it gets, the more [Lynch's] unerring gifts are confirmed.' * <i>Daily Mail</i> * 'Lynch is frighteningly skilled...searing images into the mind and forcing you to press carefully through sentences as if they are strips of long grass.' * <i>Sunday Independent</i> (Dublin) * 'Lynch...has a particular gift for finding the unexpected yet compelling image that conveys the anomalous nature of this otherworld.... [The] poetic prose is at deliberate odds with the stark horror it depicts, and yet the four blank, black pages at the terrible climax of Grace's journey are as eloquent as anything else on the unspeakable tragedy of the Famine.' * <i>TLS</i> * 'Lynch brilliantly conveys the rabid effects of the famine on his characters...and he offers us a worthy heroine to guide us through it.' * <i>Irish Examiner</i> * 'A literary beauty... It is the saddest, heaviest, most beautiful, lyrical [novel], one of the most stunning books I've read in recent times. I would urge you to read it.' * Ryan Tubridy, The Tubridy Show, RTE * 'Paul Lynch's third novel, Grace, which pushes the Famine novel into territory even richer and stranger still. As a writer, Lynch is sui generis. His style is bold, grandiose, mesmeric. He strives for large effects, wrestles with big ideas. In Melville's formulation, he is one of those writers who dares "to dive" into the darkest recesses of the soul, risking all to surface clutching the pearl.... Lynch has been compared to greats such as Cormac McCarthy, Faulkner and Beckett, while others have located him in the Irish gothic tradition of Stoker and le Fanu. Original talent often inspires critical confusion, so perhaps best to say Lynch defies easy categorisation. Meanwhile, the writer has staked out his literary terrain and is again ploughing it with customary verve and gusto...' * Burt Wright, <i>The Sunday Times Ireland</i> * 'A mes

Paul Lynch is the author of the novels Red Sky in Morning and The Black Snow. He won France's Prix Libr'a Nous for Best Foreign Novel, and was a finalist for the Prix du Meilleur Livre Etranger (Best Foreign Book Prize). He lives in Dublin with his wife and daughter. www.paullynchwriter.com