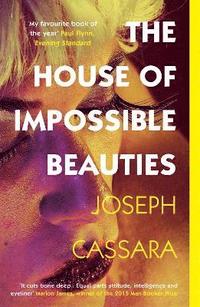 The House of Impossible Beauties

av Joseph Cassara
Häftad Engelska, 2018-10-04
119
Köp
Spara som favorit
Finns även som
Visa alla 1 format & utgåvor
NAMED A MOST ANTICIPATED BOOK OF 2018 BY Buzzfeed * Esquire * Bustle * The Millions * The Wall Street Journal * Entertainment Weekly * Nylon * Elle * Dazed * The Irish Times 'Cassara has written a heartbreaking tale of gay men struggling to survive in a world of clubbing and drugs. It is also an unexpected love story.' Graham Norton, Top Five Reads of 2018 'Cassaras's propulsive and profound first novel, finding one's home in the world - particularly in a subculture plagued by fear and intolerance from society - comes with tragedy as well as extraordinary personal freedom.' Esquire A gritty and gorgeous debut inspired by the real House of Xtravaganza made famous by the seminal documentary Paris Is Burning New York City, 1980 Nowhere is the city's glamour and energy better reflected than in the burgeoning Harlem dance scene. Angel Just seventeen years old and burnt by her traumatic past, she wants to create a family for those without. Hector When Angel falls in love with him, the two decide to set up the House of Xtravaganza, the first ever all-Latino house on the dance circuit. The Xtravaganzas They are joined by Venus, Juanito and Daniel, all with their own devastating stories to tell, each determined to survive. Told in a voice that brims with wit, rage, tenderness, and fierce yearning, The House of Impossible Beauties is a gritty and gorgeous debut - a tragic story of love, family, and the dynamism of the human spirit.
Visa hela texten

'Cassara has written a heartbreaking tale of gay men struggling to survive in a world of clubbing and drugs. It is also an unexpected love story.' -- Graham Norton * Top Five Reads of 2018 * 'The House of Impossible Beauties tells of a search not only for respect but, above all, love in a time and place that seeks to starve its characters of both... From these threads of fact and myth, Cassara runs up a fictional ensemble that craftily stitches glamour and grit.' * <i>Financial Times</i> * 'Vivid and engaging... The novel feels like an anthropological plunge into another era, enhanced by rhythmic, urban prose littered with slang and Spanglish.' * <i>The Economist</i> * 'Vibrant... The House of Impossible Beauties is especially strong at detailing the sadness of queer life... This is not a bleak novel, however - far from it. The scenes of love and support between the characters have a kindness that more than matches the sadness, and the dialogue, peppered with early 80s disco or TV references and "Spanglais" dialect, is frequently hilarious... [offering] a convincing insight into the world in which they lived.' * <i>Guardian</i> * 'Cassara's "beauties" actually does the impossible. It cuts bone deep into a scene that's all surface, mines the grit that produces glitter, and finds burning life in this lost generation of beautiful and damned. The novel strikes a flame the way a character strikes a pose - equal parts attitude, intelligence and eyeliner.' * Marlon James, Man Booker Prize-winning author of <i>A Brief History of Seven Killings</i> * 'My favourite book of this year is a fictional imagining of the back stories of the House of Xtravaganza, the subject of Jenny Livingston's peerless voguing documentary, Paris Is Burning.' * Paul Flynn, <i>Evening Standard</i> * 'Vividly imagined... Riveted by their stories, you are so struck by the Xtravaganza's strength and determination, by their vibrant spirits and humour, by their creativity, by their sensitivity to beauty and their capacity to give and receive love.' * <i>New York Times Book Review</i> * 'Gritty, fiercely impressive... Joseph Cassara has written a lithe, fiery and incredibly authentic story. A future queer classic.' * <i>Attitude</i> * 'Fabulous...a grand, beautiful tale of art, love and the human spirit.' * <i>Elle</i> * 'A vibrant and dynamic debut novel.' * <i>Cosmopolitan Magazine</i> * 'Cassaras's propulsive and profound first novel, finding one's home in the world - particularly in a subculture plagued by fear and intolerance from society - comes with tragedy as well as extraordinary personal freedom.' * <i>Esquire</i> * 'A heartbreaking yet uplifting account of one of the most culturally influential yet oppressed groups in modern history.' * Shakespeare & Co Book of the Year * 'A must for fans of RuPaul's Drag Race, this novel is inspired by the characters who inhabited the dizzying world we first saw in Paris Is Burning, the 1990 documentary.' * <i>Metro</i> * 'This is a definitive LGBTQ family story, of the sweep and intimacy that's typical in family sagas while also steeped in the trauma and sass specific to its milieu.' * <i>Entertainment Weekly</i> * 'A heartbreaking novel that burns brightly.' * <i>Buzzfeed</i> * 'A marvelously serious, deep, artful, humane read... There's so much downright gorgeous prose here.' * Paul Harding, Pulitzer Prize-winning author of <i>Tinkers</i> * 'Fierce, tender, and heartbreaking.' * <i>Kirkus</i> * 'A fascinating slice of history that looks at a world driven and created by trans women, when those voices have so often been written out of the story.' * Press Association * 'Cassara has done a superb job of reimagining a world that will be foreign and even exotic to many readers, while creating fully developed characters to

Joseph Cassara was born and raised in New Jersey. He holds degrees from Columbia University and the Iowa Writers' Workshop and has been a writing fellow at the Fine Arts Centre in Provincetown, Massachusetts. The House of Impossible Beauties is his first novel. He lives in Iowa.