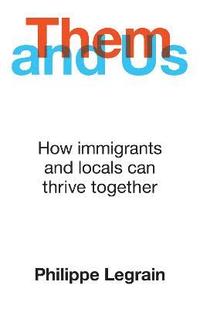 How immigrants and locals can thrive together

av Philippe Legrain
Inbunden Engelska, 2020-10-15
189
Köp
Spara som favorit
Skickas inom 5-8 vardagar.
Fri frakt inom Sverige för privatpersoner.
Finns även som
Visa alla 1 format & utgåvor
What do we really know about immigration? Immigration is one of the most controversial issues these days. Keeping them out. Taking back control. Building that wall. Whether the debate centres on economics or identity, it is often framed as 'Them' (bad immigrants) against 'Us' (good locals). But immigrants aren't a burden or a threat - and if we make the right choices we all can thrive together. Drawing on first-hand reporting, compelling stories and the latest research and evidence from around the world, Philippe Legrain explains how immigration benefits us all in many ways. Immigrants start new businesses, bring different skills and help spark valuable new ideas. They help save lives - including Boris Johnson's. As key workers, they keep coronavirus-stricken societies going, while young newcomers care - and help pay - for our ageing population. For sure, learning to live together can be tough. The book also addresses tricky issues such as 'illegal' immigration, what immigration entails for national identity, what newcomers need to do to fit in, and how societies ought to adapt. And it suggests new ideas for how to persuade moderate sceptics about the merits of immigration. If patriotism means wanting the best for your country, we should be welcoming immigrants with open arms. It is time to close the gap between myth and reality - and, in the process, close the gap between 'Them' and 'Us'.
Visa hela texten

Philippe Legrain is a critically acclaimed writer, thinker and communicator who is a leading voice in the international migration debate. Through his work and writing, as well as his international media and social media profile, he has been at the heart of the immigration debate for many years from a variety of vantage points: as the founder of Open Political Economy Network (OPEN), an international think-tank; as a senior visiting fellow at the London School of Economics and Political Science (LSE)'s European Institute; as an independent consultant and keynote speaker; and as a commentator for Project Syndicate, Foreign Policy, the Guardian and many other international media outlets. His book Immigrants: Your Country Needs Them was shortlisted for the 2007 Financial Times Business Book of the Year. Philippe was previously economic adviser and head of the team providing strategic policy advice to the President of the European Commission, special adviser to the Director-General of the World Trade Organization and a journalist at The Economist. This is his fifth book. @plegrain philippelegrain.com