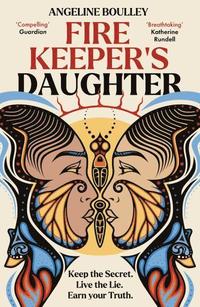 Winner of the Goodreads Choice Award for YA

av Angeline Boulley
Häftad Engelska, 2022-01-27
119
Köp
Spara som favorit
Finns även som
Visa alla 2 format & utgåvor
An instant no. 1 New York Times Bestseller Winner of CrimeFest Best YA Crime Fiction Prize Winner of the YA Fiction Goodreads Choice Awards Shortlisted for Waterstones Children's Book Prize A Time magazine pick for Best YA of All Time Keep the Secret. Live the Lie. Earn your Truth. For fans of Angie Thomas and Tommy Orange comes a ground-breaking YA thriller about a Native American teen who must root out the corruption in her community Eighteen-year-old Daunis has always felt like an outsider with her mixed heritage, both in her hometown and on the nearby Ojibwe reservation. When she witnesses a murder, Daunis reluctantly agrees to go undercover. But secretly she pursues her own investigation, tracking down the culprits with her knowledge of traditional medicine. As the bodies pile up, Daunis finds herself caught in a web of deceit that threatens the people she loves the most. 'Raw and moving' Cosmopolitan 'A story that grips like a bulldog clip on your heart' Katherine Rundell, author of The Good Thieves 'Thrilling and heartwrenching' Aisha Bushby, author of A Pocketful of Stars 'A swift-paced, compelling thriller' Guardian
Visa hela texten

'Both an interrogation of racist misogyny and a swift-paced, compelling thriller.' -- Guardian 'A story that grips like a bulldog clip on your heart.' -- Katherine Rundell, author of The Good Thieves 'Raw and moving, the intricacies of family loyalty and who comes first are deftly and sensitively explored. Firekeeper's Daughter sensitively touches on crimes and lack of accountability against indigenous women in the Native American community and identity. Boulley has crafted a nuanced and refreshing protagonist.' -- Cosmopolitan 'Both thrilling and heartwrenching, with twists and turns I didn't see coming.' -- Aisha Bushby, author of A Pocketful of Stars 'Immersive and enthralling, Firekeeper's Daughter plunges the reader into a community and a landscape enriched by a profound spiritual tradition. Full of huge characters and spellbinding scenes, it gives a fascinating insight into life on and off the reservation, with Daunis as a tough and resourceful heroine through every vicissitude.' -- Financial Times 'In this momentous YA debut, Angeline Boulley pulls from her Ojibwe background to craft her incredible protagonist.' -- Elle, Best of 2021 'Firekeeper's Daughter is a gripping and unforgettable story of family, community and identity told through the eyes of a protagonist so powerfully realised on the page, you'll swear you can hear her heart beat. Daunis Fontaine is a force to be reckoned with - and so is Angeline Boulley. This is one bold, uncompromising and elegantly crafted debut.' -- Courtney Summers, New York Times bestselling author of Sadie 'Intricate and moving. Boulley takes the reader on an incredible journey with the assurance of a veteran novelist.' -- Tochi Onyebuchi, author of Beasts Made of Night 'What do you get when you combine Tommy Orange, Angie Thomas, and Tomi Adeyemi? This genre-bending new YA thriller.' * Entertainment Weekly * 'One of this year's most buzzed about young adult novels.' -- Good Morning America 'A rare and mesmerising work that blends the power of a vibrant tradition with the aches and energy of today's America. This book will leave you breathless!' -- Francisco X. Stork, author of Marcelo in the Real World 'Beautifully crafted and filled with super sleuthing, Firekeeper's Daughter by Angeline Boulley is one of our most anticipated reads of 2021.' -- Fierce Reads 'Sharp turns and charming characters... Hitting hard when it comes to issues such as citizenship, language revitalization, and the corrosive presence of drugs on Native communities, this novel will long stand in the hearts of both Native and non-Native audiences.' -- Publishers Weekly, starred review 'Angeline Boulley's remarkable debut young adult novel is an edge-of-the-seat crime thriller that will leave young and not-so young readers in awe of the power of modern storytelling... A big, satisfying read... Although Firekeeper's Daughter twists and turns with riveting plot developments and revelations, it is Daunis' journey that drives the story along to its dramatic conclusion.' -- South China Morning Post 'Boulley doesn't overwhelm the reader with detail but leads the way through the intricacies and connections - immersing, not superimposing... The plot weaves, ducks and dives, but always convincingly and always a mixture of the beliefs and customs of the Ojibwe and of white American culture... The reader is detective and observer, placed at the heart of Daunis' moral dilemmas and the dangers she finds herself in.' -- Books for Keeps 'Soon to be a series on Netflix, this story will grip you from the start.' -- Manx Independent

Angeline Boulley is an enrolled member of the Sault Ste. Marie Tribe of Chippewa Indians in Michigan. She gained attention for her debut Firekeeper's Daughter thanks to We Need Diverse Books. It became a NYT No. 1 bestseller and has now sold in 20 territories worldwide. The book won the YA Goodreads Choice Award; the ALA Printz Award and Morris Award; the Walter Award for Outstanding Children's Literature; and is Carnegie Medal Nominated. Firekeeper's Daughter is soon to be made into a Netflix series. Angeline lives in Michigan but considers Sugar Island home.