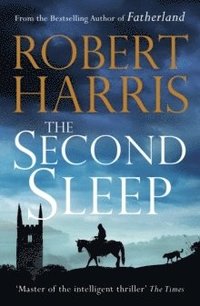 1468. A young priest, Christopher Fairfax, arrives in a remote Exmoor village to conduct the funeral of his predecessor. The land around is strewn with ancient artefacts - coins, fragments of glass, human bones - which the old parson used to collect. Did his obsession with the past lead to his death?

As Fairfax is drawn more deeply into the isolated community, everything he believes - about himself, his faith and the history of his world - is tested to destruction.
Visa hela texten

Robert Harris is the author of twelve bestselling novels: the Cicero Trilogy - Imperium, Lustrum and Dictator - Fatherland, Enigma, Archangel, Pompeii, The Ghost, The Fear Index, An Officer and a Spy, which won four prizes including the Walter Scott Prize for Historical Fiction, Conclave and most recently, Munich. Several of his books have been filmed, including The Ghost, which was directed by Roman Polanski. His work has been translated into thirty-seven languages and he is a Fellow of the Royal Society of Literature. He lives in West Berkshire with his wife, Gill Hornby.