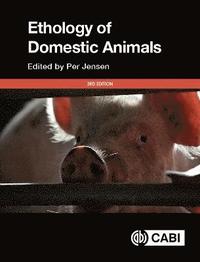 The Ethology of Domestic Animals: An Introductory Text

av Per Jensen
(1 röst)  |  Läs 1 recension
Häftad Engelska, 2017-09-27
Studentlitteratur
408
Köp
Spara som favorit
Kan levereras innan julafton!
Completely updated, revised and redesigned in colour throughout, this classic bestselling text continues to provide a concise introduction to the important fundamentals of animal behaviour from genetics, physiology, motivation, learning and cognition, through to social and reproductive behaviour, abnormal behaviour and human-animal interactions. - Concise but comprehensive coverage of all the fundamentals of animal behaviour in companion, farm and laboratory animals. - Expert authors and key opinion leaders from around the world provide the latest evidence-based information on animal behaviour and welfare. - A revised layout and design, means it is easy to find key information at a glance, making it an ideal rapid revision tool. - New for the third edition: new chapters on fur animals with the inclusion of more species and expanded sections on canine behaviour. This text remains a highly respected, essential resource for both students and lecturers in animal and veterinary science, animal welfare, zoology and psychology.
Visa hela texten

Georgia Mason is a behavioural biologist a the University of Guelph, Canada, who studies how animals adapt (or fail to adapt) to captive housing conditions, especially conditions that meet their physiological needs but are too small or monotonous to allow natural behaviour. She is also interested in the validation of animal welfare indicators. Michael Mendl is a Professor of Animal Behaviour and Welfare at Bristol Veterinary School. His research interests are in the area of animal behaviour and welfare, particularly the links between affective and cognitive processes, and the ways in which attention, memory and decision-making both influence and are influenced by affective state. He is also interested in the evolution and function of affective states, developing new measures of animal emotion and welfare that can be used under field conditions (including automated / machine learning), and understanding more about animal cognition, emotion, personality, and social behaviour with a view to identifying and minimising welfare problems for captive animals. (BA Biology, DPhil Ethology and Neurobiology) is a Professor of Animal Science and the Director of the Center for Animal Welfare at the University of California, Davis. She conducts research on the behaviour and welfare of poultry and small laboratory animals, with a particular emphasis on management and environmental enrichment. She serves on numerous national and international committees and boards that address issues related to farm and laboratory animal welfare, and teaches courses on animal welfare and animal ethics. Professor Mills is an RCVS, European and ASAB recognised specialist in clinical animal behaviour, and was the first professor of the discipline in Europe. While his clinical and scientific work has historically focused on the disruptive effect of companion animal behaviour on owners and society (problem behaviour and its management) through his work as a clinical animal behaviourist, he has more recently pursued an interest in assistance dogs and animal assisted interventions through diverse collaborations. His research in this area has included the first longitudinal study of its kind (3 year follow up) examining the effect of the pet dog on families with an autistic child, the effect of reading to dogs in schools and the impact of dogs in the workplace (currently under review). Professor Mills is a well-known international speaker on companion animal behaviour/welfare and the role of animals in society , with around 100 peer-reviewed full scientific research publications, over 40 books and chapters, and over a hundred ISBN indexed conference abstracts. He heads up a large interdisciplinary group at Lincoln with 11 Post Graduate Research students and 3 Post Doctoral Researchers. Dr John Bradshaw is a Visiting Fellow and Director of the Anthrozoology Institute at the University of Bristol, where he was formerly Reader in Companion Animal Behaviour and University Research Theme Leader for Animal Welfare & Behaviour. His main research interests are in the behaviour and welfare of domestic cats and dogs, and their relationships with people; he has published over 100 research papers and book chapters on these topics. Since 2009 he has focused his attention on the dissemination of animal welfare science to pet owners: his book "Dog Sense/In Defence of Dogs" was a non-fiction bestseller in both the UK and USA in 2011, and has been translated into nine other languages. He was one of the founders of the International Society for Anthrozoology (ISAZ), and has been a member of the Council of the Association for the Study of Animal Behaviour (ASAB) and set up its Accreditation Committee (1999-present).