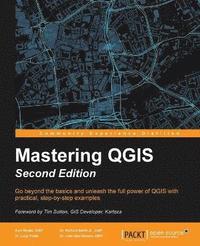 Now updated to QGIS 2.14 this edition covers all the latest features

av Kurt Menke Gisp, Dr Richard Smith Jr Gisp, Dr Luigi Pirelli, Dr John Van Hoesen Gisp
Häftad Engelska, 2016-01-06
609
Köp
Spara som favorit
Go beyond the basics and unleash the full power of QGIS with practical, step-by-step examples About This Book * This book is your one-stop solution to all of your GIS needs using the open source QGIS * Master QGIS by learning about database integration, geoprocessing tools, Python scripts, advanced cartography, and custom plugins * This example-rich, practical guide will help you create sophisticated analyses and maps Who This Book Is For If you are a GIS professional, a consultant, a student, or perhaps a fast learner who wants to go beyond the basics of QGIS, then this book is for you. It will prepare you to realize the full potential of QGIS. What You Will Learn * Create and manage a spatial database * Get to know advanced techniques to style GIS data * Prepare both vector and raster data for processing * Add heat maps, live layer effects, and labels to your maps * Master LAStools and GRASS integration with the Processing Toolbox * Edit and repair topological data errors * Automate workflows with batch processing and the QGIS Graphical Modeler * Integrate Python scripting into your data processing workflows * Develop your own QGIS plugin In Detail QGIS is an open source solution to GIS. It is widely used by GIS professionals all over the world. It is the leading alternative to the proprietary GIS software. Although QGIS is described as intuitive, it is also by default complex. Knowing which tools to use and how to apply them is essential to producing valuable deliverables on time. Starting with a refresher on the QGIS basics, this book will take you all the way through to creating your first custom QGIS plugin. From the refresher, we will recap how to create, populate, and manage a spatial database. You'll also walk through styling GIS data, from creating custom symbols and color ramps to using blending modes. In the next section, you will discover how to prepare vector, heat maps, and create live layer effects, labeling, and raster data for processing. You'll also discover advanced data creation and editing techniques. The last third of the book covers the more technical aspects of QGIS such as using LAStools and GRASS GIS's integration with the Processing Toolbox, how to automate workflows with batch processing, and how to create graphical models. Finally, you will see how to create and run Python data processing scripts and write your own QGIS plugin with pyqgis. By the end of the book, you will understand how to work with all the aspects of QGIS, and will be ready to use it for any type of GIS work. Style and approach This step-by-step comprehensive guide will let you dig your teeth into working with spatial databases, creating your own QGIS plugins, and creating your own custom graphical models.
Visa hela texten

A former archaeologist, Kurt Menke, GISP is based out of Albuquerque, New Mexico, USA. He received a master's degree in geography from the University of New Mexico in 2000. That same year, he founded Bird's Eye View (http://www.BirdsEyeViewGIS.com) to apply his expertise with GIS technology towards ecological conservation. Along with conservation, his other focus areas are public health and education. He is an avid open source GIS proponent since he began writing MapServer applications in 2002. He has used QGIS since 2007. Recently he also authored Discover QGIS for Locate Press. In 2015, Kurt was honored to be voted in as an OsGeo Charter Member. He is an experienced FOSS4G educator and a co-author of the GeoAcademy. In 2015 he was awarded the Global Educator of the Year Team Award by GeoForAll as part of the GeoAcademy team. Kurt authors an award winning blog on FOSS4G technologies and their use in community health mapping (http://communityhealthmaps.nlm.nih.gov/). Dr. Richard Smith Jr., GISP is an assistant professor of geographic information science in the School of Engineering and Computing Sciences at Texas A&M University - Corpus Christi. He has a PhD in geography from the University of Georgia and holds a master of science in computer science and a bachelor of science in geographic information science from Texas A&M University - Corpus Christi. Richard actively researches in cartography, systems integration, and the use of geospatial technology for disaster response. He is an advocate for FOSS4G and building FOSS4G curriculum. He is also one of the co-authors of the FOSS4G Academy (http://foss4geo.org). He has collaborated with other writers in his field, but Mastering QGIS is his first book effort. Dr. Luigi Pirelli is a freelance software analyst and developer with a degree with honors in computer science at Bari University. He worked for 15 years in the Satellite Ground Segment and Direct Ingestion for the European Space Agency. Since 2006, he has been involved in the GFOSS world, contributing in QGIS, GRASS, and Mapserver core, and developing and maintaining many QGIS plugins. He actively participates in QGIS Hackmeetings. Luigi is the founder of the OSGEO Italian local GFOSS chapter. Now, he lives in Spain contributing to this GFOSS community. During the last few years, he started teaching PyQGIS, organizing training from basic to advanced level, and supporting companies to develop their specific QGIS plugins. He is also the founder the local hackerspace group Bricolabs.cc, focused on open hardware. He likes cycling, repairing everything, and training groups on conflict resolution. Other than this book, he has also contributed to the Lonely Planet guide Cycling Italy. Dr. John Van Hoesen, GISP is an associate professor of geology and environmental studies at Green Mountain College in rural west-central Vermont, USA. He earned an MS and a PhD in geology from the University of Nevada, Las Vegas, in 2000 and 2003. He is a certified GIS Professional (GISP) with a broad background in the geosciences and has used some flavor of GIS to evaluate and explore geological processes and environmental issues since 1997. John has used and taught some variants of FOSS GIS since 2003 and over the last three years has taught graduate, undergraduate, and continuing education courses using only FOSS GIS software.