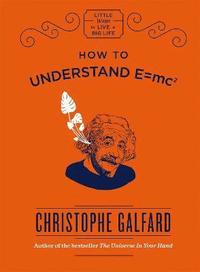 av Christophe Galfard
Inbunden Engelska, 2017-09-21
140
Köp
Spara som favorit
Do something amazing and learn a new skill thanks to the Little Ways to Live a Big Life books! The beginning of the 20th century heralded a scientific revolution: what a few brilliant minds uncovered about our reality in the first twenty years has shaped the history of our species. And one of them in particular stands out: Einstein, with his celebrated E=mc2. In this remarkable and insightful book, Christophe Galfard describes how E=mc2 is a direct consequence of the Theory of Special Relativity, the theory of how objects move and behave, at speeds close to the speed of light. He considers Einstein's legacy in the light of the 21st century, with fresh hindsight, and considers its impact on our vision of reality. The reader will discover that far from being just a formula, it is a brand new understanding of the nature of space and time. Some of the greatest scientific breakthroughs in the history of science have been made by geniuses who managed to merge and unite hitherto separated domains of knowledge. Galfard explores two unifications with Einstein's theories, and looks at the even bigger picture of how E=mc2 has changed our world, and what it entails for the future. Throughout, Galfard takes the reader on an extremely entertaining journey, using simple, jargon-free language to help the reader gain a deeper understanding of science. With humour and patience, he guides us through the world of particles, anti-matter and much more to bring us closer to an ultimate understanding of reality as we understand it today.
Visa hela texten

In our relentless pursuit of a fulfilled life, we've become a knowledge-hungry nation. The Little Ways To Live A Big Life series will feed your yearning for learning * Red Magazine *

Christophe Galfard has studied Advanced Mathematics and Theoretical Physics at Cambridge University, England, where he did his Ph.D. on Black holes and the Origin of our Universe under the supervision of renowned Professor Stephen Hawking. Praised for his ability to explain difficult ideas with simple words, Christophe has been, for the past few years, devoting his time to spreading scientific knowledge to the general public. He has given public talks in front of more than 200,000 people, children and adults alike, throughout the world. He is a regular guest on TV and radio shows in France, where he is one of the most acclaimed popular science writer and speaker. Christophe has written many award-winning popular science books for children about the Solar System and our Earth's Climate before writing The Universe in Your Hand, his first book for adults, now an international best-seller translated into 16 languages.