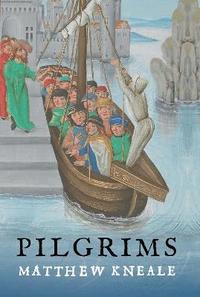 av Matthew Kneale
(1 röst)
Inbunden Engelska, 2020-06-04
198
Bevaka
Spara som favorit
Tillfälligt slut – klicka "Bevaka" för att få ett mejl så fort boken går att köpa igen.
Finns även som
Visa alla 2 format & utgåvor
A The Times and Sunday Times Book of the Year 'An enthralling and wonderfully vivid novel from a master storyteller' Joseph O'Connor 'Kneale's medieval world is animated with a refreshing lightness of touch' Sunday Telegraph 1289. A rich farmer fears he'll go to hell for cheating his neighbours. His wife wants pilgrim badges to sew into her hat and show off at church. A poor, ragged villager is convinced his beloved cat is suffering in the fires of purgatory and must be rescued. A mother believes her son's dangerous illness is punishment for her own adultery and seeks forgiveness so he may be cured. A landlord is in trouble with the church after he punched an abbot on the nose. A sexually driven noblewoman seeks a divorce so she can marry her new young beau. These are among a ragtag band of pilgrims that sets off on the tough and dangerous journey from England to Rome, where they hope all their troubles and their prayers will be answered. Some in the group, however, have their own secret reasons for going. Others, while they might aspire to piety, succumb all too often to the sins of the flesh. A riveting, sweeping novel of medieval society and historic Englishness, Pilgrims illuminates the fallibility of humans, the absurdities and consolations of belief, and the very real violence at the heart of religious fervour.
Visa hela texten

This is a kindly book, too: humane, generous, enjoyable * TLS * [Kneale] captures an ingrained sense of English, Christian superiority over those who are not considered to truly belong that feels all too uneasily familiar. * Observer * Uproariously funny scenes... For all of the hilarity of the pilgrims' capers, Kneale does a good job of showing us the darker side of British history - and reminding us that in silence lies complicity. * Financial Times * A warm-hearted tale, full of intriguing historical detail, plot twists and comedic light touches. * Robbie Millen, The Times * A source of constant delight ... A wonderful novel * Tom Holland, Front Row, BBC Radio 4 * Rich and absorbing * The Times * Not many novelists can evoke a period as far back as 700 years but we're there for every step of this absorbing journey. * The New European * Kneale's novel takes readers back to an age of religious superstition with such assurance that every word rings true. * Mail on Sunday * Kneale illuminates and entertains with a quietly skilful touch. * The Arts Desk, Boyd Tonkin * Kneale's medieval world is animated with a refreshing lightness of touch. * Sunday Telegraph * Diverting [...] an enjoyable exploration of ancient English beliefs and loyalties that still have disquieting echoes today. * Evening Standard, Nick Curtis * There's a sly, humane comedy in the way Kneale ventriloquises both the stranglehold of religious law on daily life and thought and the endlessly inventive individual efforts to exploit and interpret it. * Guardian, Justine Jordan * Matthew Kneale's new novel could hardly be a more welcome getaway... Humane outrage pulses through this novel along with comic ebullience. * Sunday Times * An enthralling and wonderfully vivid novel from a master storyteller. * Joseph O'Connor *

Matthew Kneale is the author of seven novels and two works of non-fiction. His debut novel, Whore Banquets, won the Somerset Maugham Award, Sweet Thames won John Llewellyn Rhys, and English Passengers, shortlisted for the Man Booker and Miles Franklin, won the Whitbread Book of the Year Award in 2000. His latest non-fiction book, Rome: A History in Seven Sackings, was a Waterstones Book of the Month. For the last two decades he has lived in Rome with his wife and two children.