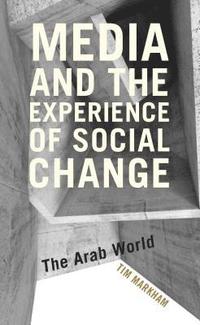 Media and the Experience of Social Change

av Tim Markham
Häftad Engelska, 2017-07-15
479
Köp
Spara som favorit
Skickas inom 10-15 vardagar.
Fri frakt inom Sverige för privatpersoner.
Kan levereras innan jul!
Finns även som
Visa alla 2 format & utgåvor
For centuries scholars have fretted about the gulf that exists between the enormity of historical change and the banality of people's everyday lives. This is said to be exacerbated in our media saturated age, immersed as we have become in an endless stream of sensations and distractions. In response, media theorists and practitioners alike try to come up with new ways of breaking through people's complacency and waking them up to the reality or what's going on out there. Drawing on both philosophy and an investigation of what people actually do with media, this book takes aim at that conventional wisdom and opens up new ways of thinking about media and the way we experience change. For politics, journalism, activism and humanitarianism, the upshot is that we shouldn't be trying to provoke moments of revelation amongst publics and audiences, but to understand what is really at stake in the way the present endlessly unfolds in everyday life.
Visa hela texten

The Arab uprisings, as well as the tumultuous political upheavals that have occurred since, suggest that we live not only in a world of crises but one that is undergoing profound transformations. Tim Markham's distinctive book thoughtfully encourages us to approach and understand this same world as lived, communicated and experienced in the everyday. He has written no less than a phenomenology of the political at once timely, eloquent and insightful. Recommended. -- Simon Cottle, Professor of Media and Communications at the School of Journalism, Media and Cultural Studies at Cardiff University Tim Markham explores how and why people navigate the world in relation to everyday experiences of modern media. Delving into the news reportage of the 'Arab spring' uprisings, he recasts familiar concepts - such as identity, cultural value, citizenship, engagement and trust - to secure an alternative basis for theory-building. This is a perceptive, challenging and at times provocative study, one certain to prompt fresh, counter-intuitive thinking about journalism's responsibilities in public life. -- Stuart Allan, Professor and Head of the School of Journalism, Media and Cultural Studies, Cardiff University At the time in which political life has become increasingly volatile and polarised there is so much at stake in the future of journalism and media. Political upheavals in the Middle East in particular are played out across a number of media platforms, highlighting frustrations and aspirations of millions of people demanding to be heard and calling for change. Tim Markham opens out this field and critically examines the conflicting, contradictory, micro impulses that stimulate and constrain media production and consumption in the region. In contrast to some of the celebratory accounts of the role of social media as the agent of change, this book anchors media in a much broader context of everyday capitalism. -- Gholam Khiabany, Senior Lecturer in Media and Communications at Goldsmiths University of London

Tim Markham is Professor of Journalism and Media at Birkbeck, University of London. He is author of Media and Everyday Life: A Textbook (Palgrave Macmillan, 2016 in press) and The Politics of War Reporting: Authority, Authenticity and Morality (Manchester University Press, 2011), and co-author of Media Consumption and Public Engagement: Beyond the Presumption of Attention (Palgrave Macmillan, 2007, revised ed. 2010).

1. Introduction / 2. Professional Media Amid Change and Hysteresis / 3. Empirical Perspectives: Arab Journalists Debate the Upheavals / 4. Change and Hysteresis in Cairo / 5. Flux and Atrophy in Beirut / 6. Anti-politics, Populism and Social Media / 7. The Politics of Change: Media, Protest and Conflict / 8. Facebook Revolutions? Understanding the Work That Social Media Do / 9. Living in Interesting Times: The Work of Experience, Engagement and Identity / References