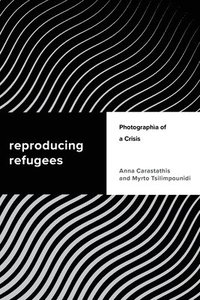 av Anna Carastathis, Myrto Tsilimpounidi
Inbunden Engelska, 2020-02-28
1369
Köp
Spara som favorit
Skickas inom 3-6 vardagar.
Fri frakt inom Sverige för privatpersoner.
Since 2015, the 'refugee crisis' is possibly the most photographed humanitarian crisis in history. Photographs taken, for instance, in Lesvos, Greece, and Bodrum, Turkey, were instrumental in generating waves of public support for, and populist opposition to "welcoming refugees" in Europe. But photographs do not circulate in a vacuum; this book explores the visual economy of the 'refugee crisis,' showing how the reproduction of images is structured by, and secures hierarchies of gender, sexuality, and 'race,' essential to the functioning of bordered nation-states. Taking photography not only as the object of research, but innovating the method of photographia- the material trace of writing/ grafi with light/ phos- this book urges us to view images and their reproduction critically. Part theoretical text, part visual essay, Reproducing Refugees vividly shows how institutional violence underpins both the spectacularity and the banality of 'crisis.' This book goes about synthesising visual studies with queer, feminist, postcolonial, post-structuralist, and post-Marxist theories: Reproducing Refugees: Photographia of a Crisis offers theoretical frameworks and methodological tools to critically analyse representations, both those circulated through hegemonic institutions, and those generated from 'below'. It carves a space between logos and praxis , ways of knowing and ways of doing, by offering a new visual language that problematises reified categories such as that of the 'refugee' and makes possible disruptive, alternative, resistant perceptions . The book contributes to the fields of migration and border studies, critically engaging visual narratives drawn from migration movements to question dominant categories and frameworks, from a decolonial, no-borders, queer feminist perspective.
Visa hela texten

This timely book offers a vivid critical account of the ethics and politics underpinning the visual economy of what has been notoriously called "Europe's refugee crisis". From the standpoint of the borders of postcolonial Mediterranean, it opens compelling terrains of critical engagement with epistemologies and lived experiences of "crisis", tracing how the photographic can become an apparatus of biopoliticized reproduction, visual objectification and epistemic violence, but also, occasionally, comes to articulate transformative solidarity and utopian imaginaries. Reproducing Refugees: Photographia of a Crisis provides an engaging meditation on how fraught registers of precarity, displacement, belonging, and national citizenship are embedded in racialized, gendered, and sexualized fields of vision and knowledge production. In thinking of "crisis" as a frame through which subjects and the political are (re)produced and made (in)visible, the book mobilizes queer feminist, antiracist, and decolonial perspectives to test the limits of bringing crisis and reproduction together. In so doing, it offers a valuable lens through which to imagine the possibility of change, whereby photographia might be repurposed to unsettle normative figurations of the present.--Athena Athanasiou, Professor of Social Anthropology, Panteion University of Social and Political Sciences In Reproducing Refugees, Anna Carastathis and Myrto Tsilimpounidi make a compelling case for the central and indispensable role of photography in mediating the spectacle of Europe's "refugee crisis." This book offers a vital critique of the visual economy of objectification by which human subjects crossing state borders are turned into the racialized and gendered objects of other people's pity or protection, or alternately, of their fear and loathing. Meanwhile, the visual discourse of photography propagates an illusion of transparency even as it remains both equivocal and incomplete - lending its imagery to diametrically opposed interpretations, while also framing events and predicaments in ways that conceal far more than they reveal. And by framing "crisis," the authors show that photography's visual economy is indeed an economy of power that inculcates ignorance and cultivates consent and complicity with the border regime's violence.--Nicholas de Genova, Professor and Chair of Comparative Cultural Studies, University of Houston A significant intervention into the politics of 'crisis' and mobilities, this exciting book foregrounds reproduction, temporalities and the visual. It demonstrates the intensively productive nature of a metaphorical and literal queer lens on human movement. Challenging containment in nations and families in favour of making new connections it offers a guide to thought and action. Read it!--Bridget Anderson, Director of Migration Mobilities Bristol and Professor of Migration, Mobilities and Citizenship, University of Bristol Engaging with the photographic representation of the summer of migration of 2015 through the angle of social reproduction theory, Anna Carastathis and Myrto Tsilimpounidi's book offers an excellent decolonial queer-feminist analysis of the contemporary conjuncture of crisis in the modern-colonial world system.--Encarnacion Gutierrez Rodriguez, Professor of Sociology, University of Giessen

Anna Carastathis is the author of "Intersectionality: Origins, Contestations, Horizons", a 2017 Choice Outstanding Academic Title. She has published work in Hypatia: A Journal of Feminist Philosophy, Signs: Journal of Women in Culture and Society, Feminist Review, Philosophy Compass, and Why Race and Gender Still Matter: An Intersectional Approach. Myrto Tsilimpounidi is Marie Curie Fellow at the Institute of Sociology, Slovak Academy of Sciences