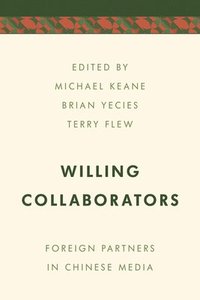 av Michael Keane, Brian Yecies, Terry Flew
Häftad Engelska, 2019-12-30
399
Köp
Spara som favorit
Finns även som
Visa alla 2 format & utgåvor
Now in paperback, this volume examines this phenomenon, looking at examples from film, documentary, television, animation and games. In recent years, many media producers, screenwriters, technicians and investors from the Asia-Pacific region have been attracted to projects in the People's Republic of China. The Chinese state's willingness to consider collaboration with foreign partners is a major factor that is enticing and supporting a range of new ventures. Projects, often with a lighter commercial entertainment feel, compared with the propaganda-oriented content of the past, are multiplying. With this surge in production and the availability of resources and locations, creative talent is moving to the Mainland from South Korea, Hong Kong, Taiwan and Japan.
Visa hela texten

From webtoons to popular blockbusters, Willing Collaborators offers an expansive and critical insight into the industrial workings of the dynamic and fast changing landscape of East Asian media production. The editors have assembled an impressive array of contributors to this volume, producing an essential study that elucidates exemplary moments in the 'long game' of collaborative East Asian media production and in particular the key role of China in this vibrant network. -- Olivia Khoo, Associate Professor in Film and Screen Studies at Monash University Charting the East Asian creative migration converging in China, Willing Collaborators: Foreign Partners in Chinese Media encompasses a range of audio-visual industries including film, television, animation and online video services. This lively new collection contributes to our further understanding of an evolving East Asia and indeed global mediascape under the sway of China. -- Ying Zhu, Professor in the Department of Media Culture, College of Staten Island, the City University of New York; author of Two Billion Eyes: The Story of China Central Television and the forthcoming book, Film as Soft Power and Hard Currency: The Sino-Hollywood Courtship Required reading for understanding the ambitions and appeal of China's film industry and market, which have shot from near irrelevance to become East Asia's cinema hub in less than 20 years. This ground-breaking and eye-opening anthology reveals that Hollywood's China connection is only one small part of a much larger, more complex and more compelling story. -- Chris Berry, Professor of Film Studies at Kings College London Drawing on essential case studies from throughout Asia, Willing Collaborators offers a timely, informative guide to understanding China's influence on media collaborations within the region. For readers seeking to understand the transformative power of Chinese capital in media and beyond, Willing Collaborators draws together a stunning array of leaders in the field to weigh in on this increasingly important topic. -- Aynne Kokas, author of Hollywood Made in China China's media are developing a global presence and Willing Collaborators: Foreign Partners in Chinese Media provides welcome insights into the dynamics of the global-regional-local nexus. This collection of essays by leading scholars in the field is a valuable contribution to the study of a highly relevant and yet under-researched topic, for which the editors deserve strong commendation. -- Daya Thussu, Professor of International Communication, University of Westminster

Michael Keane is Professor of Chinese Media and Cultural Studies at Curtin University. He is Program Leader of the Digital China Lab.His key research interests are the digital transformation in China; East Asian cultural and media policy; and creative industries and cultural export strategies in China and East Asia. He is editor of the Handbook of China's Cultural and Creative Industries (2016), and author of China's Television Industry (2015), Creative Industries in China: Art, Design and Media (2013), and China's New Creative Clusters: Governance, Human Capital and Regional Investment (2011). Brian Yecies is Associate Professor in Communication and Media at the University of Wollongong, where he researches on film, digital media, creative industries, innovation ecosystems, and cultural policy. He is the author of Korea's Occupied Cinemas, 1893-1948 (2011), The Changing Face of Korean Cinema, 1960-2015 (2016), and South Korea's Immersive Webtooniverse and the New Media Revolution (Rowman and Littlefield International, forthcoming) - co-authored with Ae-Gyung Shim. He is also a chief investigator on two Australian Research Council Discovery Projects: Digital China: From Cultural Presence to Innovative Nation (2017-2019), and Mobile Korean Webtoons: Creative Innovation in a New Digital Economy (2018-2020). Terry Flew is Professor of Communications and Creative Industries, and a Chief Investigator with the Digital Media Research Centre at the Queensland University of Technology, Brisbane, Australia. He is the author of The Creative Industries, Culture and Policy (2012), Global Creative Industries (2013), New Media: An Introduction (Oxford, 2014), Understanding Global Media (Palgrave, 2018) and co-author of Media Economics (2015). In 2019-20, he was President of the International Communication Association.