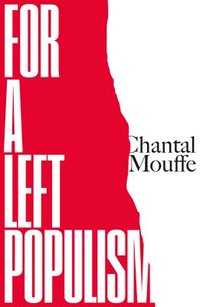 For a Left Populism

av Chantal Mouffe
Häftad Engelska, 2019-08-20
113
Köp
Spara som favorit
Skickas inom 7-10 vardagar.
Fri frakt inom Sverige över 159 kr för privatpersoner.
What is the "populist moment" and what does it mean for the left?We are currently witnessing in Western Europe a "populist moment" that signals the crisis of neoliberal hegemony. The central axis of the political conflict will be between right- and left-wing populism. By establishing a frontier between "the people" and "the oligarchy," a left-populist strategy could bring together the manifold struggles against subordination, oppression and discrimination. This strategy acknowledges that democratic discourse plays a crucial role in the political imaginary of our societies. And through the construction of a collective will, mobilizing common affects in defence of equality and social justice, it will be possible to combat the xenophobic policies promoted by right-wing populism. In redrawing political frontiers, this "populist moment" points to a "return of the political" after years of postpolitics. A return may open the way for authoritarian solutions--through regimes that weaken liberal-democratic institutions--but it could also lead to a reaffirmation and extension of democratic values
Visa hela texten

"Argues in favor of leftist populism as a means to combat both elitist, neoliberal technocracy and reactionary, xenophobic versions of populism." --Publishers Weekly "Influencing left parties as they enter government, from Greece to Portugal to Mexico. It is a beach-sized introduction to a major left thinker of the twenty-first century." --Paul Mason, Guardian (Summer Reads) "Refreshingly bereft of the sputtering outrage and bafflement that characterizes the growing genre of liberal self-help books, Mouffe channels populism's agonistic clarity." --Thea Riofrancos, n+1 "An admirable attempt to get us thinking again about what a worthwhile politics might look like, one based on notions of equality, ecology, sovereignty, solidarity and social justice." --Gavin Jacobson, New Statesman

Chantal Mouffe is the Professor of Political Theory at the Centre for the Study of Democracy at the University of Westminster. Her books include Gramsci and Marxist Theory, Hegemony and Socialist Strategy (with Ernesto Laclau), Dimensions of Radical Democracy, The Return of the Political, The Democratic Paradox, On the Political, Agonistics, and Podemos: In the Name of the People (with Inigo Errejon).