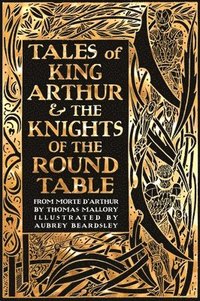 Tales of King Arthur &; The Knights of the Round Table

Bloggat om Tales of King Arthur &; The Knights of th...

Sir Thomas Malory (fl. 1450-1500) was an English writer and knight whose Le Morte D'Arthur was the first prose piece dedicated to King Arthur and the knights of the Round Table. Like the enchanting mystery of the legend of Arthur, Malory himself is a bit of a mystery. Though his identity is not certain, it is believed he wrote the famous 'Death of Arthur' while imprisoned for violent crimes - based partly on an inscription in the front of the original script begging readers to pray for his soul's deliverance, both in life and death. Aubrey Beardsley (1872-98) had a short but influential artistic career. Before dying of tuberculosis, he created a series of drawings and prints in a short span of seven years that explored themes of decadence and symbolism, becoming a leading figure in Aestheticism and Art Nouveau. His sometimes gruesome images shocked his Victorian audience, but they remained particularly popular among English publishing houses for book illustration, the deluxe edition of Malory's Morte D'Arthur being one example.