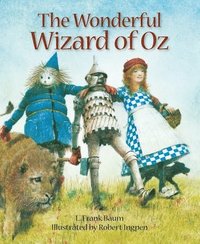 The Wonderful Wizard of Oz

av L Frank Baum, Robert Ingpen
Inbunden Engelska, 2019-02-01
289
Köp
Spara som favorit
Finns även som
Visa alla 9 format & utgåvor
An iconic classic, The Wizard of Oz by Frank L. Baum is a must-read for adults and children alike. Follow the yellow brick road! Dorothy thinks she is lost forever when a terrifying tornado crashes through Kansas and whisks her and her dog, Toto, far away to the magical land of Oz. To get home Dorothy must follow the yellow brick road to Emerald City and find the wonderfully mysterious Wizard of Oz. Together with her companions the Tin Woodman, the Scarecrow and the Cowardly Lion whom she meets on the way, Dorothy embarks on a strange and enchanting adventure. Frank L. Baum (1856-1919) was born in New York. He enjoyed making up stories, particularly for his own children. The Wizard of Oz, based on their favourite bedtime story about a land of Oz, was published in 1900 and it immediately became a huge international success. He wrote several sequels and numerous other kinds of books under a pseudonym.
Visa hela texten

L Frank Baum was an American writer and editor who is best-known for his novels about Dorothy and the land of Oz. He was a fierce advocate for women's rights and many of his novels depicted women and girls in masculine roles. Robert Ingpen was born in 1936 in Geelong, Australia. In 1986 he was awarded the Hans Christian Andersen Medal for his contribution to children's literature and he has been honoured with Membership of the Order of Australia.