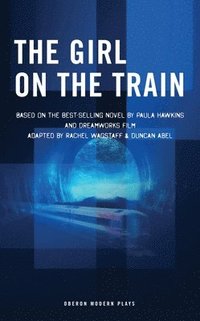 The Girl on the Train

av Paula Hawkins
Häftad Engelska, 2018-05-12
119
Köp
Spara som favorit
Skickas inom 10-15 vardagar.
Fri frakt inom Sverige över 159 kr för privatpersoner.
Finns även som
Visa alla 8 format & utgåvor
Rachel Watson longs for a different life. Her only escape is the perfect couple she watches through the train window every day, happy and in love. Or so it appears. When Rachel learns that the woman she's been secretly watching has suddenly disappeared, she finds herself as a witness and even a suspect in a thrilling mystery in which she will face bigger revelations than she could ever have anticipated.
Visa hela texten

Bloggat om The Girl on the Train

Rachel Wagstaff's adaptation of Sebastian Faulks' bestselling novel Birdsong was staged at the Comedy Theatre, West End, 2010-11, directed by Sir Trevor Nunn. Rachel also adapted Sebastian Faulks' The Girl at the Lion d'Or for a five part series for Radio Four. The musical Moonshadow, which she co-wrote with Yusuf Islam (Cat Stevens) was previewed at the Royal Albert Hall in 2010. Duncan Abel is a writer of plays, radio plays and short stories. He lectured in Creative Writing at the University of Hertfordshire from 2014 to 2015. Duncan was shortlisted for the 2010 Luke Bitmead Award, for his novel The Way Home. He is currently under commission, with Rachel Wagstaff, to Original Theatre Company Paula Hawkins is a Zimbabwe-born British author, best known for her best-selling psychological thriller novel The Girl on the Train.