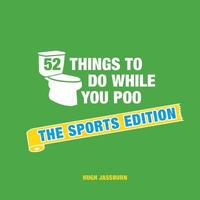 52 Things to Do While You Poo

av Hugh Jassburn
Inbunden Engelska, 2018-04-12
99
Köp
Spara som favorit
Finns även som
Visa alla 2 format & utgåvor
Prepare for a sporting contest like no other! Any true fan knows that the porcelain umpire's chair is an ideal place to put your sporting knowledge to the test. This compendium of fun activities and quiz questions will have you spotting the difference at Wembley, finding a lost helmet at Lord's, and going for gold in Olympic omniscience. From bestselling author and professional brain-teaser Hugh Jassburn, this illustrated puzzle book includes a range of challenges relating to football, rugby, tennis, cricket, athletics, golf, boxing, basketball, rowing, snooker and more. Pit your wits against such quiz questions as these: What is the lowest darts score you can't achieve with a single dart? In 1981 Muhammad Ali retired from boxing - what was his career record? What is Tiger Woods' real first name? Who was the first cricket player to score a century and take ten wickets in a test match? What sport has four letters, is played all around the world, and begins with a "t"? A winning gift idea, this book will score a major-league success with sport obsessives and casual fans alike.
Visa hela texten

Hugh Jassburn has been pooing since 1974. After several months of producing a variety of stools (mostly in washable and reusable nappies) he moved on to disposables. By 1978 Hugh was a regular toilet user and hasn't looked back since. He is not a fan of cheap toilet paper, and strongly believes the flap should always be at the front of the roll. Hugh lives in Shitterton, Dorset, and dreams of one day moving to Pratt's Bottom in Kent.